My muse has been rather squished for the last few days. Dealing with some real life stuff that was draining and emotional and my poor muse just got … flattened. I haven’t written anything for days and it is killing me.
So I went back and scraped through some of my original stuff from a couple of years ago. I can’t post it at fanfic or on Ao3 as it is original work and it predates this blog so it was never posted here. I have been fooling around and uploading the stories onto my Wattpad account. They are all short stories basically.
And I am learning as I go. Nothing like throwing myself in and dog-paddling like mad before I drown.
Wattpad is very basic. All html - at least I think it is. Half my bio has links and half doesn't and I don’t know why. Sigh.
I paste in text and it retains formatting so that’s good… I think.
I have muddled about with covers and worked out how to do them in photobucket but they are pretty basic and I swear that site has it in for me. No no don’t resize it; damn you. It looks horrible now! Reload and start again.
Covers in Wattpad are book sized; a vertical rectangle of 256x400. Good for books, bad for any other kind of banner size. I think fanfic is trying to use that shape, too. But that means that none of my current banners can be reused unless I get them resized.
You can add links to an image but it kind of shows up down on the right hand side like the image below under a heading of ‘media’ and I think the only way you can use more than one image is to make a collage of them yourself before you add the link in. I think… You can add videos, though. Which means you could probably put a song into your chapter if you used a video link to it. Hmmm… or maybe those cute book trailers that I don’t even know how to begin making. Possibilities there. 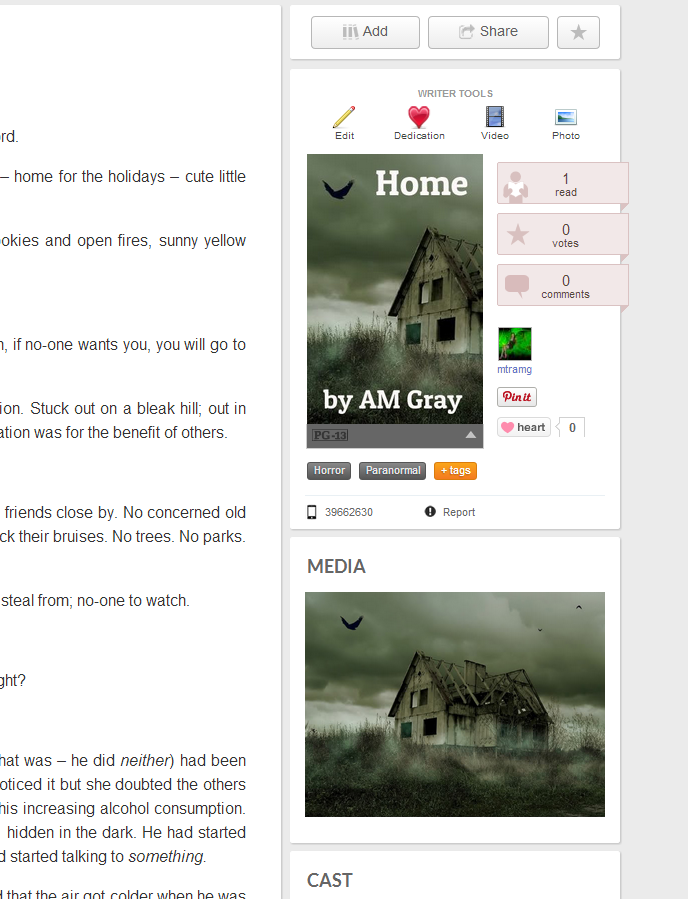 I am surfing YouTube watching videos made by teens to try and work it out.
Such is my life.
Grins.


Oooh. I have one Wattpad follower! Yay *hugs solitary follower*
Posted by Unknown at 12:58 No comments:

Email ThisBlogThis!Share to TwitterShare to FacebookShare to Pinterest
Labels: Wattpad

I unfollowed someone on twitter this week. That is not that unusual but the reason why I did it was because she broke what I consider to be a rule of Twitter etiquette.
In order to promote her book she used hashtags that related to other things. For instance: ‘he’s no #teenwolf but he’s what she has been looking for’ OR ‘#onceuponatime a mermaid left the sea’ or whatever they said. For the record, her book had zero to do with either of those fandoms. And she did it often enough for me to notice it in the huge stream of twitter messages that roll over my dash.
I think that is just flat out rude. People who have those tags marked to show up in their search engines will get her promoting her book by piggybacking on another fandom.
No.
Just, no.
Posted by Unknown at 11:32 No comments:

You know… in the past I have been accused of hegemony. I know, right… bwahaha. But in any case, someone once accused me of this. Meaning that all my fics ended in marriage and babies and the subjugation of woman. Which they don’t and it was abundantly clear that the person hadn’t actually read any of my fics because they left the review that said that in my polyamorous fic where Bella left her baby at home (with his two fathers) to go to university and study law. Hey, they couldn't have the baby for her. Biology is not that advanced yet. And I don’t write male pregnancy because science.
I have been very busy uploading all my one shots to Ao3. Phew. Wipes brow. I think they are all there now. All … let me just check… yep 49 of them. 120,650 words in total. Odd pairings and all.
Wow!
But the one thing that is a bit different on Ao3 from fanfic.net is that you can search by tags. And a number of warnings are standardised, including Graphic Depictions of Violence, Major Character Death, Rape/Non-Con, and Underage sex. And that is a good thing. Those are all major triggers for some people.
I have been trying to tag things properly and of those 49 fics that I have loaded, I killed a main character in ten of them. They died of old age, they died in childbirth, in one I even killed all the Cullens (and the demon baby - ‘Shattered’) and destroyed people left, right and centre. I have a 20% kill rate… lmao. And I haven’t even started to load the longer fics although they often do have happier endings.
I suppose in a shorter form it’s a chance to try more unusual pairings or to write riskier things. It’s only 5k words.
Posted by Unknown at 18:00 No comments:

An update of my earlier post.
Fictionpad is very quiet. I made a point of following back everyone who followed me but I am not getting many hits at all. But it is very Twilight heavy and twilight Edward/Bella heavy. The top 40 stories are ALL Ed/Bella. Sigh…
I will try harder to review other stories. I don’t read much fanfic anymore, I just don’t have the time and I suppose it might look a little one sided if I am posting and expecting reviews and not giving them myself. But it does have ‘likes’ and it takes no effort to click that button.
The stats are unusual. I can’t see my stats for a story unless I go to my main page and when you have 70 stories that is a lot of scrolling to even find a particular story on the main page. The stats are not viewable within the story to me but oddly, other viewers can see my stats if I have elected not to hide them. And more easily than I can as the poster. Huh?
And I open my stories in full page mode but other people’s open in an app style small format called ‘popup viewer’. I am using the same interface so I am not sure why it is different for me as a viewer. And it is different for different authors, too and I can’t see where to change it on their stories. I’m confused.
Wattpad stats on the other hand are not very informative. I get that they are in the beta stage but they have three axes and no date. So you can’t tell how your stats have changed over time. Surely any meaningful stats table needs a time/date axis?
So all I get is a giant blue rectangle that gets bigger according to the number of hits. hmmm
Ao3 I have spent days loading up some of my one shots. Yeah, I know right, some… I am up to 33 stories so far. I haven’t even tried to load any multi-chapter stories. Curse you fanfic for stopping auto uploads! Seriously it is all the tag entering that takes the time.
I write a lot of rare pairings so the tags are not searchable for some of my pairings but it seem to be those stories that are garnering the greater number of hits. Interesting.
Fanfiction.net. Comparing ‘Wake up and smell the coffee’ on each format, it looks like this after a week.

And it seems that fanfic is still my best forum. I do have more of a presence on there so that might be understandable but this story is still pulling 10-15 hits a day and it has been posted for two years.
Posted by Unknown at 14:05 No comments: 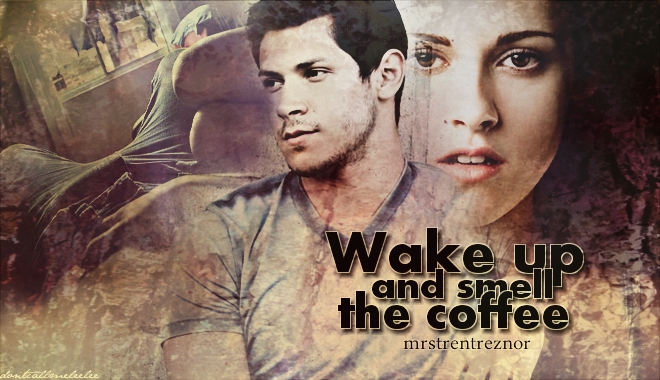 Joanna Penn from the creativepenn declares that Wattpad is a good and useful tool for authors and a great place to find readers. I saw one of her YouTube vids about using the site and decided to sign up.
I have seen mentions of it on the news. Most famously for a sixteen year old girl who wrote a One Direction fanfic being offered a three book deal by a major publishing house because of her statistics. Yes, really.
I have been a member of An archive of our own (ao3) for a little while but have only been reading, when I got the time, and leaving reviews for a few of my favourite authors who are not at fanfiction any more. My post page was empty.
So, as an experiment, I posted ‘Wake up and smell the coffee’ on both sites at the same time. It is my most popular one-shot on fanfiction and has the ridiculous number of 122 reviews and 12,830 hits. They both allow uploads of banners and it has a nice banner that don’tcallmeleelee made for it a little while ago.
Let’s see what Wattpad and Ao3 do with it!
Here are the links for my page on each site: Wattpad
and A03.
My username at wattpad is mtramg; you can load original works on the site and that is the point of the exercise, so I hope no-one accuses me of plagiarising my own works of fanfiction. Bwahaha.
Most annoyingly, fanfiction is blocking pings from external sites, so you used to be able to copy existing works over with one click… but no more! Dammit. It will take me 78 days to load them all if I do a story per day. AND chapter stories have to be loaded chapter by chapter. Sigh…
Posted by Unknown at 19:47 No comments: