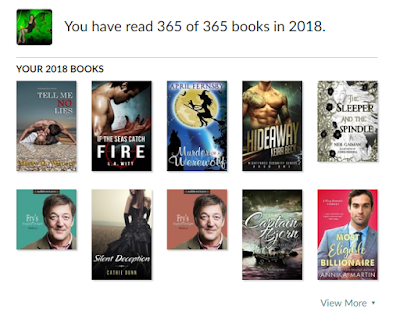 I set a target of a book a day. That seemed reasonable. Last year I ended up reading 425 for the year, so I still have *checks notes* 105 days of the year left. [as IF I’m not going to read any more books?!]
They are a number of genres and a mixture of formats. Shorts stories, long novels, radio plays, audiobooks, library borrows of all types, and physical books. I am a sucker for the Lifeline charity books sales. Heck at $1 a book, I’ll try anything that catches my eye.
And my ratings are spread, too.

This is the first year that I’ve been keeping records of my ratings as I go, so I can’t compare it with last year’s percentages. I won’t give everything five stars, that’d be a pointless waste of time, but I’m pretty generous with 40% getting 4 stars.
But how am I going with the boxed sets, I hear you ask. I’ve read 60 boxes of… mumbles… 263.
Sighs
I know one thing: I’m going to be way more ruthless in the future. If I’ve tried two books and they’re both bad, I’m deleting any other titles I have from the same author.
So many books, so little time.

I’m listening to a podcast.

It’s a bonus episode of writing class radio**
The theme is love, for February and Valentine’s Day, but they’re talking about all kinds of love.
A woman is reading her work about how she’s in an emotional state at a pharmacy. She has just heard her friend is dying. She collects her purchases but when she gets to the counter, with tear filled eyes, she just hands her wallet to the cashier.
‘She handled it like we were sisters,’ she reads.
The cashier takes out her cash, puts the change back in, and says to her, “Whatever news you just received… I’m sorry.”
Her breath catches, she can’t speak for a moment. And I’m crying with her.
I’m back in a memory of my own from ten years ago. My mother is dying. She is in a hospital that’s a six hour drive away and I am mid divorce, and mid house sale. I have three small children and no one to leave them with. No one to hold the open house for me. No one to hold my hand.
Our father is useless. My sister is there so I know Mum isn’t alone. She says Mum doesn’t know who anyone is. She’s lost in her own past; a combination of the morphine and her Alzheimer’s. We don’t know how long it will take for her to die. It could be days or weeks. Weeks I don’t have. I don’t even have days.
If I make the trip, she won’t know that I am there.
It’s taken two years of fighting in the divorce courts to reach this stage. Two years in which the children and I have been waiting for a resolution. We can’t pause the process now. $$
I don’t go. And when my sister phones me with the news that our mother is dead, I absorb it and I don’t react. I have things to do. We need milk.
I get in my car and I drive to the store and I buy groceries. I pay for them and then walk away. The cashier calls me back. I have forgotten the groceries.
The man behind me in the queue laughs at me.
I look at him.
I am unable to say anything to him.
I want to cry, but I can’t.
I want to say, “My mother just died, but we needed milk,” but it all seems so absurd. I don’t know how to express the multitude of what I am feeling. How will he understand? I don’t think he can. He’s just laughed at a person who is clearly lost.
I feel guilty I wasn’t there at her bedside.
I feel guilty that I didn’t say goodbye.
I made a choice between my past and my present and at that moment, I’m not sure it was the right decision.
It’s June and my mother is dead.
*****
** https://soundcloud.com/writing-class-radio/valentinesspecial-final
$$ my elder brother just said ‘you’re supposed to do one of the three most stressful things, not all three at once.’
I’m writing this in September, the month of her birth.

I saw someone comment on Goodreads on the number of unread books they held. It was under a thousand. My number is 3,093. Snort. Chuckles to self. They’re not even in the game.
In my attempt to manage my recent diagnosis of ADHD I saw a recommendation for Organizing Solutions for People with ADHD: Tips and Tools to Help You Take Charge of Your Life and Get Organized by Susan C. Pinsky.
Wonder of wonders, the local library had a physical copy. It was a bit of an adventure to get it: first off I had to work out how to make a branch transfer request (cue my anxiety); then it kept saying it was still being read and hadn’t been returned; then it said it was at my library, but when I went to collect it, it was not on the reservation shelf. Not on the normal shelf either. It was gone.
‘I was just trying to get organised,’ I wailed at the librarian. She patted my hand and promised she’d find it. It had taken weeks to get to this point. Weeks in which I had to keep reminding myself to check on its progress.
With two librarians searching, it was eventually located.
Finally, I could read it.
The author said that she ran a professional organisation business and wondered at intelligent, creative clients who would backslide from one week to the next. What was wrong with them? Then her own child was diagnosed with ADHD and she realised the strategies she used with her, worked with clients, too. Weigh, adopt, reject or modify. Some of it was slapdash but if it worked, it stayed.
It certainly wasn’t Pinterest or Instagram pretty. She also recommended against solutions that increased your work burden, like recipe databases or complex filing methods. Rainbow sorted bookshelves give me hives just looking at them.
I also read an interesting Tumblr post (that I now can’t find… tumblr is like that) saying that the whole minimal stuff movement assumes you have money. Let’s choose a pen as the example. You can allow yourself to only keep one pen if you know at any time if that pen runs out or breaks, you can just go buy another one. You have to have the money and the spoons to do it. You have to have a car with fuel in it to get to the mall/newsagent. You have to have a pain-free day or whatever… that’s not easy for everyone.
My hoarding ties into that and also into FOMO [fear of missing out]. I will grab a book when it’s free knowing I can’t afford it when it’s back at full price.
As another example, I bought a couch from Ikea ten years ago. The cover is white. It’s been washed multiple times but it’s not easy to do. It’s enormous - one of those corner ones with five seats - and if the washing machine copes, the clothesline nearly bends with the weight of it. Plus, last time it took two whole days to dry. Let’s not add in the number of litres of water used when 100% of my state is in drought.
Ikea usually makes covers for their products but for a number of years this particular couch wasn’t one of them. To get another cover custom-made would have cost more than the price of a new couch. But recently, they were in stock so I grabbed one. It cost $160. Now I have a huge pile of white canvas in the middle of the living room floor. It’s in pretty good condition; a couple of stains but no holes, and its super soft after a decade of butts sitting on it.
Kid 1 stubbed a toe on it and complained so I know I have to do something with it. The dressmaker in me looks at the huge amount of material and zippers and imagines what could be made out of it. Am *I* ever going to make those things? Nope. It would just add to my unfinished project list, but I can imagine it. It kills me to throw it away.
So it doesn’t move while my brain fights with itself over it. I’ve written this as I sort it out for myself.
Today I will put it in a box with the Ikea diagram of the couch and chuck it in the back of the car. Next time I go past the charity shop I’ll give it to them. Maybe somebody else will use it or make something out of it? If they don’t, it’s out of my hands.
Mostly, it’s out of my brain. And that’ll work.