I have not done a blog post for a little while, nor have I written any publishable flash fiction as I was working on a new project. *rolls eyes at self* I know, I know… finish one of the old projects, AM.
And… in order to get a big chunk of this project done, I have signed up for camp nanowrimo. I hit deadlines when they are not set by me, and oddly having the separation of the word target held by nanowrimo, I will probably hit it even though I was the person who said I could write 80k in a month.
No. I don’t understand my brain, either and I have lived with it way longer than you have.
Wish me luck.
No… not with the brain… with the writing.
Posted by Unknown at 16:09 No comments:

Email ThisBlogThis!Share to TwitterShare to FacebookShare to Pinterest
Labels: nanowrimo

I loaded up a few stories on Wattpad a while ago and just recently they have updated their story statistics. In case you haven’t used Wattpad, it is designed to be read on phones and mobile devices. So, each chapter loads in a number of smaller parts and the stats record if readers read all the parts of each chapter, or if they skip ahead.
It looks like this for “I’ll be home for Christmas’. 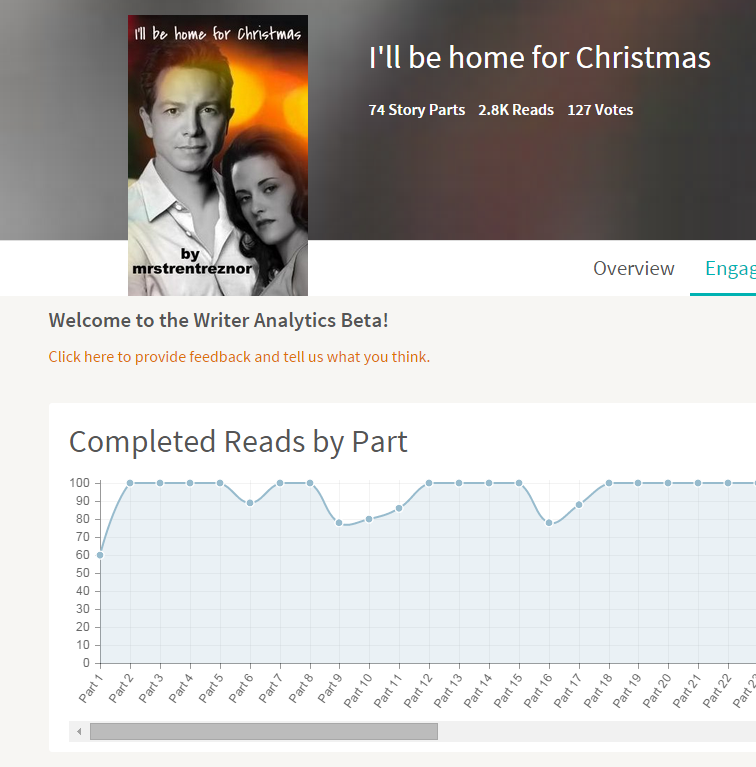 It looks pretty good. Most readers read all of each part. The story kept their attention.
I will admit to scratching my head at the huge dip for chapter/part 1 but then I understood; if people start a new story and they don’t like it for whatever reason, they stop reading. I was trying to work out if they had read it before somewhere else. So I guess that is a record of how many people gave up.
At part 9 you can see 20% of readers didn’t finish that section.
This is kind of neat for writers. I can go to that section and try to work out why I lost readers. I have to guess; they aren’t telling me. For nearly 3,000 reads the story has 127 stars and 8 comments (4 of which are me replying). Wattpad stars are the equivalent of Ao3 kudos or Facebook likes.
Now I can’t see what they don’t like about ch9; it is Bella meeting up with the pack after her absence of five years. And there are some later chapters that they didn’t read all of as well, but if one really dips then perhaps it is worth rewriting it?
The stats also tell me which parts got stars and on what dates they were given, and it also reveals the demographics of my readers.

Oddly, the numbers don’t show unless you hover over it but the lavender half is age range 13-18, the green quarter 18-25 and the brown private.
In gender, half is female and half private.
I do love stats and I think this is all useful. It will even tell me when I got new readers as it knows when people reread. So if I do a promotion, I can tell if it worked. I only have 14 followers here and I have been very lax at posting anything, (I’m not writing fanfic at the moment) but I also haven’t been reading and commenting on other people’s stories either. And that is the way to be a real participating member of a community.
So if you are reading, take the time to review; writers need to know what you liked and what you didn’t.