Update on the witch story 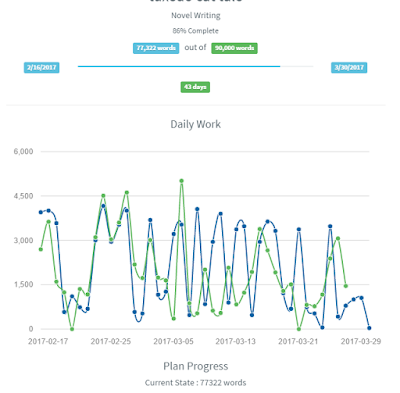 After many days scribbling and typing I am up to 77322 words or 86% complete. There are a few things that need filling in, and a couple more scenes to write but it’s pretty close to done. First draft, of course, and I’m not sure it will reach 90k words. But that doesn’t matter. There isn’t a target or a minimum word count required. It will take exactly as many words as it takes to tell the story.
According to Scrivener, that comes out at more than 200 pages, or a pretty standard novel length.
I started off well, but lost it a little in the middle, as I often seem to do, but knowing myself a little better, when the words wouldn’t come I went back to writing with pen and ink - typing it up later. It seems to keep me from wandering off to ‘just look up this’ or ‘just check twitter’ or whatever.
And on one day I didn’t write a single word. If I had kept up with pacemaker I would have been just under 10k words ahead of where I am.
So, all in all, not bad.

Email ThisBlogThis!Share to TwitterShare to FacebookShare to Pinterest
Labels: works in progress

Why do I keep writing small town settings?

I just finished a book set in a tiny town. It occurred to me that I have recently set a few of my own stories in small towns, and I got to wondering why.
I guess it’s easier to keep track of everyone. There is the bloke who runs the store, the lady who has the gift shop, the kid who works at the gas station, and so on. There’s a limited population. One of each trade, unless having two is a conflict point.
What happens when a second real estate agent opens? Or a rival gift shop, or whatever.
The rivalry thing is a common romance trope. Or the one-upmanship of your daughter’s wedding must be better than the neighbours’ daughter’s wedding. I’ve read a few of those. They can’t work in a huge town with dozens of weddings every weekend. At that scale it doesn’t matter as much.
Making characters up is hard work. They have to be different, sound like themselves, have their own backstories and so on. Each character is the hero of their own story.
And it’s easier to make them care about other things, or to show them caring.
Their community is smaller and a change of attitude is more noticeable. If they dislike the protagonist because they’re new in town, that’ll show. If that protagonist does something that brings new industry and economic growth to the town, the locals will really care. Some may oppose it if they’re change averse. Others may love it and adore the protagonist for ‘saving’ the town.
It’s harder to write or show that interaction in a population of thousands or millions.
I was born in a tiny town. It currently has 211 people.
I have lived in all kinds of places from a town that small to the second largest city in the world. Jakarta’s current population is 31 million.
That’s a lot of stories to tell.

Stop trying to save me, inner critic

I scheduled reminders in my google calendar so that I don’t forget I have a blog. As opposed to forgetting I have a website; that one’s a deliberate task avoidance issue… sighs. Yeah, yeah… I’ll get to fixing that. Soon…
I was listening to a new podcast - I know, right. It’s so unlike me. Petal to the metal is from J Thorn and Rachael Herron. They ‘met’ talking on other podcasts or being interviewed by Joanna Penn or … god, I don’t know, somewhere in the web realm.
This week they were talking about FoMO - or fear of missing out.
Wikipedia defines this as:
Fear of missing out or FoMO is "a pervasive apprehension that others might be having rewarding experiences from which one is absent". This social angst is characterized by "a desire to stay continually connected with what others are doing".
I’ve told you before that I am the worst (best?) book hoarder. Especially if they are free for a limited time, or price reduced or whatever. I subscribe to all the ebook notifiers like BookBub and Freebooksy. I will grab a free boxed set not having read a word of the author. That ‘normally $X.XX now $0.00’ label gets me every time.
I adore books. I believe that you cannot have too many of them. But this also stems from an incident where I did indeed miss out on a price reduced copy. And I was annoyed with myself. So now I will grab it and rationalise that I can delete it later if it turns out to be unreadable.*
But the FoMO isn’t what my brain gets the heebies about. I’ll give you an example from my current work in progress. I was jammed for the last couple of days on the idea that my witch main character, works hard, pushes herself, upgrades her powers and finds a previously untapped power of fire. And she uses that in the final showdown.
My issue is that I am concerned that some reviewer will say ‘yeah? So there must be skeletal remains left’.
I’m worried about a non-existent review for a book I haven’t even finished writing.
…
Yeah. It isn’t logical.
I’m writing a witch and a shapeshifter. Neither of which is logical.** And a shapeshifter that wears a suit when he’s human to match his cat markings.***
The bad guy disappearing in a flutter of ash is a common trope in TV witch shows like Charmed or Bewitched. It’s arguable that people might even EXPECT it to happen in a witch fight.
So why do I latch onto that as a fear? Probably because it’s my inner critic trying to ‘save’ me again and it’s chosen to pick that particular thing to be problematic about.
Stop trying to save me, inner critic.
~~~
* this is how you end up with two thousand ebooks jammed in your kindle app, AM.
** please don’t @ me with comments about how witchcraft is a valid belief system. I'm talking book witches.
*** shapeshifters keeping their clothes on… well the trad Hulk does. Twilight wolves busted out of their clothes when they shifted but never seemed to be naked when they turned human again. What? Seeing Alex Meraz’s ass was high on my list of things to do. I say ‘was’ because my wish was granted in ‘Never back down 2’ And yes, I own it on DVD. Smiles.

Links:
The Petal to the metal
Bookbub
Freebooksy

It’s been raining in Sydney. It has been raining almost continuously for the last ten days or so. And we’ve got crazy hail storms.
My back veranda is covered with alsynite roofing. It was punched by fist sized spiky hailstones and it did not win the fight. As far as I can tell the house roof doesn’t have any broken tiles. From my walks, I can see that none of my neighbours are sporting tarpaulin roof covers. So that is some good news. The laundry pile of Mount Washmore is increasing daily and my whole house feels damp; everything has a grimy surface touch. Ugh. I HATE it. Unintelligible frustration noises.
But back to writing… my brain won the ‘hey let’s write that shiny new idea’ battle. I have allowed it six weeks to write one shiny new idea that was almost fully plotted out. It should be about 90,000 words - a standard novel length. [I am aware that being at war with my own brain is … odd.]
Here’s my short blurb for it (which needs work):
Gen, the magic shop owner and low grade witch is just trying to keep her head down when her aunt is kidnapped by some guys who want her to cast death magic on the local sheriff. It’s a trap; she knows that, but she can’t tell what they really want.
Dominic, the cat shifter, thinks he has found a witch who could make him her familiar but she’s got troubles of her own and her power is too low to hold him.
Can they rescue her aunt and foil the bad guy’s plan without killing anyone? And can Dom stay by her side forever as her witch's familiar?
To do that Gen might have to hold her head up and be seen and that scares her more than anything.
Like most things I’m not sure where the idea comes from. I saw a one sentence prompt 'what do you mean you're closed?'. I wrote a short story about a small girl who turned a guy into a toad, I had some other random ideas about shifters and witches familiars and then I saw a cute shot of a black and white cat wearing a bow tie… and voila.
I used pacemaker app to set a random daily target and it is going really well. I even added in a whatsit to the blog so you can see how I’m going, too. Public accountability. 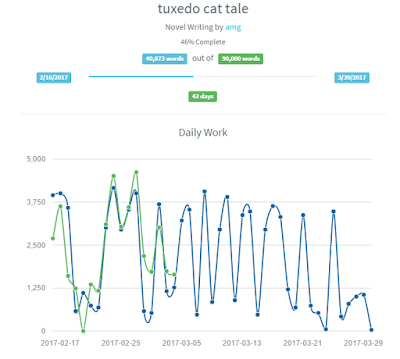 I have it on random, but there are several different ways to set up the daily targets.
40,000 down… 50,000 to go.
Links:
Pacemaker
The hut - my short story on magic, girls and toads