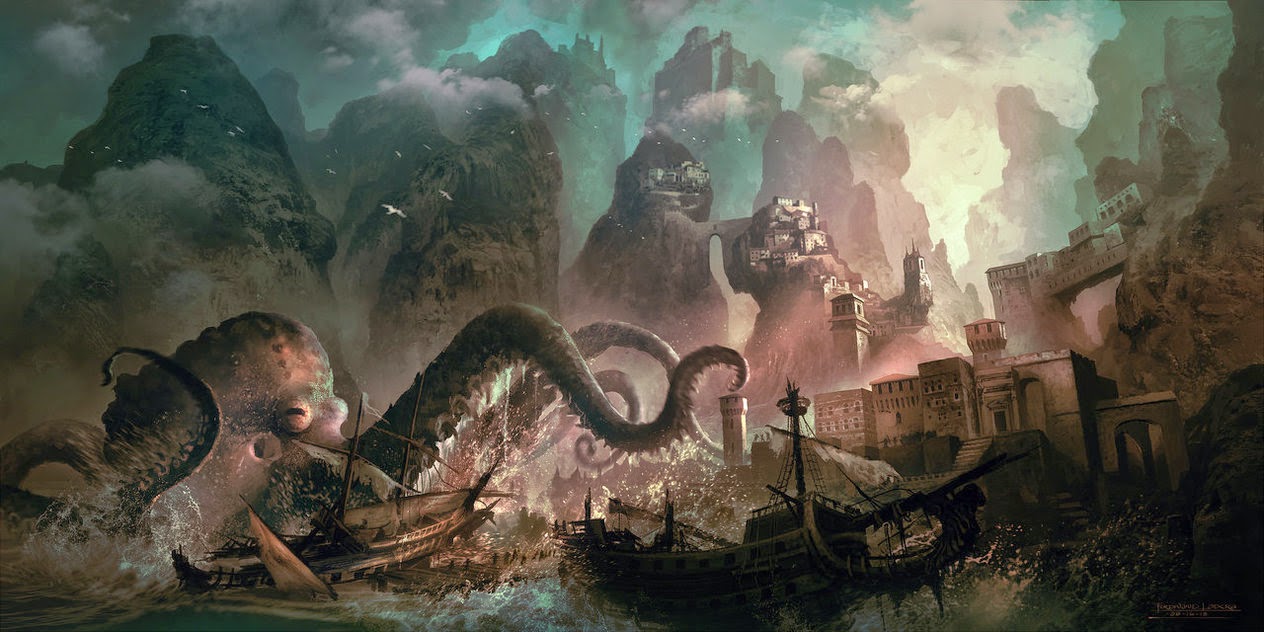 The pirate town of Lobo de Mar was a place of sanctuary. They all needed to fence their goods, sell items off, buy supplies, and then spend their hard earned coin on women and drink. And of course, some coin on repairs, new sails and supplies. It only worked if everyone kept the peace.
And everyone did.
Until... there was a new guy. He was brash, arrogant, and too sure of his abilities given his age. Most pirates learned the hardest way. His crew were equally young and inexperienced. But he had a few lucky breaks and once he had some prizes, a few other crew members with greater experience came on board and they helped him get greater prizes.
So his recklessness made him attack an old Danish ship. and he took something he should not have, a small carved emblem of a cephalopod. He was young and he didn’t believe in ancient sea creatures.
When he threw the bag of stolen jewellery onto the fence’s table, the fence sorted through it chatting as he did so. Then he stopped talking.
“What?” Young Mitch asked.
“Oh no, son. You should not have taken this.” He held up the emblem.
He looked momentarily unnerved. “Pfft. You don’t believe that rubbish, do you?”
“How long have you held this?”
He shrugged. “I dunno... a week... maybe ten days.”
“You fool. Why can you not listen to your elders?”
“Because they are stupid old men full of the ridiculous stories of the past.”
The fence’s house was built close to the quay front. It was about four storeys tall with a large storeroom at the back. Close to the harbour and the dock was convenient for ships, not so good for bad weather. But the harbour was protected from most weather events that was why the pirates used it.
The fence threw the emblem in his face. “Get rid of it!”
“What?”
“Get on a quick ship and get out of here as fast as you can.”
Mitch looked flummoxed and then he laughed. “You don’t believe that-”
The alarm bells went off before he finished the sentence.
The fence ran to the window and looked out. Nothing was there yet, but it was coming. He spun to face the pirate captain. “You have killed us all.”
Mitch paled.
“The kraken,” whispered the fence.
“No! It doesn’t exist.”
“It does.”
Mitch looked at the emblem in his hand, and then he threw it at the other man. “Take it!”
“It’s already here. You idiot. Didn’t anyone tell you not to steal that?”
“One of the old guys - but he didn’t make any sense!”
“You just didn’t believe him.”
Some of the cannier pirates were abandoning the town for the ships but they were running out of time. The freak wave crested in the harbour entrance where the water started to shallow out. Others were running for the higher ground. Out of range.
Reaching out of the water, the gigantic tentacle wrapped around the first ship. It dipped but bobbed back up before the tentacle slithered further around it and then started to tighten. The woodwork groaned, almost screamed as the ship was compressed and then torn apart. Shards of wood exploded out; tearing through the sides of other ships, or striking into the buildings around the docks.
“It c-can’t be,” said Mitch. “The kraken is a myth.”
The enormous body lifted out of the water as three of its tentacles reached past the ships and towards the watchtower.
Mitch grabbed the emblem and ran. He ran towards the creature.
If the fence was right, then this attracted it, or controlled it. He was hoping it was the latter. He had brought it here and he was responsible for all the damage and the deaths it caused.
Not that he even knew how to control it, but he had to try. They were all dead if he didn’t.
Shoving through hysterical people, he tried to get closer to the water. He clenched his fingers around the emblem and he shouted, “Stop!” It couldn’t hear him but it seemed to turn towards him.
Maybe it only understood Danish? But the word for stop was close enough in both languages.
“STOP!”
It stopped.
He almost didn’t believe it. He pointed back out the harbour entrance. “Forlade!” (leave)
It didn’t want to. It gripped tighter to the ship it was wound around, snapping it in half.
“Ikke. Forlade. Vente.” (no. leave. wait.)
It went. But the damage it left behind was immense.
People looked at him in horror. They were frightened of him.
He smiled.
It was not a pretty smile.