I follow all kinds of blogs on tumblr. One of which is author, Maggie Stiefvater’s. I own a couple of her books. Her blog is very interesting and she’s got some good things to say on working with mental health issues. She writes, paints and loves her cars.
I saw the images of her progress as she designed a set of tarot cards to go with her Raven Cycle series. I’ve never owned a tarot deck, but it was on my wish list. I remember telling a friend about that and she said she gave away her deck after it started to freak her out a little. I knew that you are supposed to give them away, rather than throw them out.
One day as I was tooling about on book depository, there they were. The Raven’s Prophecy Tarot and it was reduced. 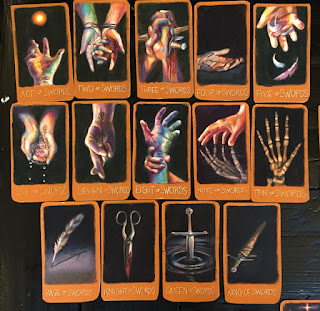  
Oooh.
I did the click thing.
When they arrived they are much bigger than standard playing cards. I settled down in bed that night with a different kind of book to read. I shuffled the pack as I read and eventually tried to do a full reading for myself.
It was all a bit muddled. Hey, newbie here.
So I tried cutting the pack into three piles, taking a card from each and doing a three card draw to cover my past, present, and future.
And the oddest thing happened.
First draw I got three cards from the same suit, in order but it was reverse order. The book suggested that I was moving from bad to good, and on to better, as I moved from my past towards my future. Nice.
I tried again, thinking that I had not shuffled the pack well.
It happened again.
Different suit, same three card reverse order. I look those up.
Same deal: worse, to better.
I shuffle the crap out of that deck and I tried again.
You know what I’m going to say… I tried again. Third time. Same thing.
Seriously? What are the odds?
Spooky, eh?
I told my friend and she said, “See? That’s why I gave them away!”

Links:
the art, of course, belongs to Maggie Stiefvater and is taken from her Tumblr page
Maggie’s tumblr

Posted by Anne-Maree Gray at 21:02 No comments:

I have been having great fun reading old romance novels from Jennifer Blake. I’m talking 1970’s circa stuff. Her books have been re-released on Kindle and they are routinely offering them free to generate interest and sales.
I am a lifelong book hoarder. I will grab a free book that I think I might (one day) get around to reading.
The quality has been a little spotty, but the ones I am enjoying the most are the full on Louisiana Gothic romances. I know some of the story elements are problematic, especially the way it treats the slaves. Recently, I read the original Gothic novel, The Mysteries of Udolpho. It was a trip, I tell you. I wondered if anyone had re-written it; updated or modernised it, but I couldn’t find any evidence of it - other than Jane Austen writing her own satirical version in Northanger Abbey. Amongst the overwriting and the bad poetry is a great story. One that has been read since 1794 when it was published.
Some months ago I read a Dean Koontz writing book and Gothic was one of his categories. This is his recipe for writing a Gothic romance novel:
A young heroine, alone in the world and often an orphan, goes to an old and isolated house to live with her last living relatives. Everyone in the house is a stranger to her. At the house, the heroine meets a cast of suspicious characters (servants, the lady of the house, one or two sons) and soon finds herself plunged into some mystery—either of supernatural or more mundane origins, most often concerning the death of someone in the house. Inexplicably, she becomes the target of the supernatural or mundane killer's attacks. Concurrent with the development of this mystery plot is the growth of a romance between the heroine and one of the young men in the household. Either this man is her only safe haven in the dark events of the story—or he is as much a suspect as any of the other characters. The conclusion of a Gothic must always promise marriage or the development of genuine love between heroine and hero.
Louisiana Gothic adds in the environment, the bayou, as another thing against the heroine and the slaves provide the supernatural element.
After I finished the last Blake book, I went to bed and I had a revelation.
I could move the entire thing to Australia. The whole Gothic recipe would work in Australia. Isolated, dangerous, a family estate, sons fighting over inheritance, and the element of magic/supernatural could be from Aboriginal Australians.
‘I’ve invented a new genre,’ I told myself.
Next morning, I google it … curses. It’s existed forever. It was just that I hadn’t worked out that everything from ‘The term of his natural life’ to ‘Picnic at hanging Rock’ is categorised as Australian Gothic. Patrick White has won literary awards for this genre. Australians are particularly good at putting this into film. Mad Max and even Wolf Creek fit the style.
I’ll file that one away in the ‘nooo brain' box I made for ideas I can’t work on right now. Maybe it’s not an original idea, but I still reckon it’d work.
Posted by Anne-Maree Gray at 10:28 No comments:

In the last few weeks I wrote a fanfiction one shot. A twilight one with Sam and Bella. It was a request from a long time reader.
It ends with them in a happy place, and a lot of the reviews ask for more. I do have a habit of extending a short story into a full blown one. Apologies, Hurt, I’ll be home for Christmas, and Swans mate for life, all started as one shots.
Some of my original fics are extensions of flash fiction written to writing prompts.
I guess if there is enough of an idea to write a short story, there might be more for a longer one?
But some reviewers just kept asking.
I spent a lot of my time and about a thousand words explaining to a couple of readers why it wouldn’t work. I explained about story structure and how you needed something to keep the reader turning the pages, otherwise it was a boring story.
So to extend this - I've already dealt with Jake and Emily. Sam and Bella are happy, they've agreed to go out ... so where's the story? She didn't cliff dive, so Alice doesn't come back and Ed doesn't try to kill himself. Victoria sent Laurent, but is she crazy enough to attack Bella anyway even if the Cullens aren't around? (I've written this too many times)
Is there some other threat to the lovers? Volturi? nope. Edward? maybe (written that, too). Charlie freaks about her dating a NA - unlikely
I could write pages of happy Sam Bella, but it's boring to read, nothing happens, there's no conflict, no threat. Great life, boring story.
But perhaps I should have said that it wouldn’t work for me.
One of the super neat things about fanfiction is that you could write ten years of happy chapters in Sam and Bella’s life with no conflict and people would read it. And they’d probably love it.
But it’s that it just doesn’t work for me to write. Not when my head is full of pushy characters, who want their conflicted, angsty, sexy stories told.
Links:
The warmth of the earth
Apologies
I’ll be home for Christmas
Swans mate for life
Hurt
Posted by Anne-Maree Gray at 12:03 No comments:

Email ThisBlogThis!Share to TwitterShare to FacebookShare to Pinterest
Labels: fanfiction

I saw my gyno this week for a yearly check-up and he told me I had lost 10 kilograms since my last appointment. That’s equivalent to 22 pounds for my US readers.
It surprised me, not the amount, but I thought it was over two years. It’s not unsurprising for me to lose that amount in that time period. I’ve been gaining and losing the same 20 kg my whole life. I had been a chubby kid. That weight was probably gained over the year before. But now I walk every day and I am careful with what I eat.
But what got me thinking was scent. I bought some plain soap this week and the first time I used it… wham. I was back in time. I was fourteen and my mother was very ill with cancer. I got packed off to the farm to live with my aunt and uncle. I had nothing to do. I didn’t walk as much as I did in the city. And I was worried about my mum and no one made much of an effort to tell me how she was. I had to go to the local high school and it didn’t offer my subjects. I found the whole experience pretty bad. So I ate and I got fat again.
The farmhouse had a shower on the back veranda and that was the one you used if you were super dirty before you were allowed inside. My uncle always used it, and I did on the days when I had been riding horses or feeding pigs or whatever.
I couldn’t have told you what the farm soap smelt like if you asked me all these years later, but the second I smelt it, I knew. And the new soap I bought smelled exactly the same. I was, for a moment, that sad fat teen.
Given it’s such a strong trigger for an emotional response I have noticed that it’s rare to read it. Writers always describe what they see, less often what they touch and rarely what they smell. Maybe we should do more of that?
Don’t forget to describe all the senses when you’re writing.

Posted by Anne-Maree Gray at 12:02 No comments:

Well, I fixed some of the issues with my kobo reading app for Windows. But only after I had deleted it and reinstalled it. And re-started my PC. Only then did the books I had bought start to show up in the app. Prior to that, they were lost from both the PC app and my phone.
I still can’t work out how to find anything easily. It defaults to a search of the site when I want it to search my library.
There is also no way to tag things yourself.
My Kindle has a dozen categories: my star rating for GR reviews, the category, completed, etc. many titles are dual listed.
And I can easily find a title.
That makes me think twice about downloading on Kobo.

Posted by Anne-Maree Gray at 21:41 No comments: