I was chatting to a reviewer on fanfiction this week. They told me that they were struggling with writers' block and I replied at some length - because I can’t help myself… and then I thought… hey, that might make a good blog post.
So, here it is.

I am a firm believer that there is no such thing. The plumber who comes to your house doesn't say that he doesn't feel like fixing your toilet today. But I know what you mean - some days the words come hard. And you know what? Ages later when I read through the text I can't tell which bits were written on days when I had to force words out like the last bit of toothpaste left in the tube. No-one else can tell either.
Some hints:
*have a routine - write at the same time/place
*block out your writing time and DO it. Butt in chair at 6pm or whatever
*playlists - music - spotify or 8 track - people have readymade playlists. Pick one that matches your world. Spooky, southern style? look up True Detective playlists. DON'T get distracted. Some authors make their own. Maggie Stiefvater shares her’s.
*record your word count - when do you write the most? I do well late at night, others prefer early morning
*turn off or mute social media - I'll just check Twitter, or tumblr, and an hour later my writing time is gone
*have something with you to record ideas - I carry a notebook & pens in my handbag, but other people write messages in their phone or record it in their phone. (One friend puffs as he is jogging - and then *puff puff* she said...) I write in waiting rooms, on public transport and because it is a notebook I can't look up twitter
*write about how hard it is to write. Just getting words down on anything is a start
*free write - you kind of meditate and just type out anything
*change the colour of your white blank page - I set the default in Google Drive to a nice pale green - weird but it works for me
*writing prompts - photos or sentences writeworld on tumblr has several a day - problem is, I want to write them all :( and I keep writing short stories that beg to be extended
*give yourself a gold star - put one on the calendar for each 500 or 1,000 words you write.

If you are stuck on a storyline:
*plot it out - super rough but it makes you think about where it is going. A boy is asked to help find a girl lost in the woods, when he meets her again she doesn't notice him, but then when she shouts at him he turns into a wolf, and his wolf likes her etc... It is easier to write towards an endpoint when you know what it is. It doesn't matter if it changes as you write it, and it is much better to waste a small amount of time to think about issues rather than write 30k words and find it can't work. I used to just make it up as I went along but the more I write, the more I realise I need a plan; even a really rough one. Think of it as your directions to a place - you wouldn't drive to somewhere without them, even if you take a detour or two on the way.
*write the WORST things that could happen in the next scene - play the ‘what if’ game. Be as nuts as you want - one might be useful. The ones you reject - at least you are thinking about the characters and how they would behave and then the right way to do it will appear
*write a different scene or pov - I switch to a pack scene - I love writing funny pack dialogue. I make myself laugh and then I am back on track
*write the last scene - JK Rowling did this. Wrote the last scene of the last book
*write out of order - do the scene that excites you and then fill in the gap to get them there
*interview your character - pretend you are doing 'press' for the book - so Adam, what made you like Eve?
*finish what you start - There is no better feeling. I'll admit that I am crap at this. I am constantly leaving stories to write another one and then I just end up with a huge pile of unfinished things. And those characters shout at me; they want their story told. Now, I try to rough plot out the new idea and then put it aside. If I have that 'map' I can write it later; even add a photo of an actor that looks like the main character or the image that inspired me. When I finish the one I am writing, that story is waiting for me. I want to write it and it’s all there. No stress about what to do next. And I can't forget what the story idea was; it's written down. 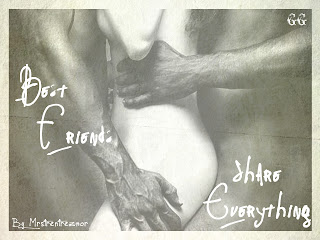 Last night as I was sleeping in my warm bed, Best Friends Share Everything crashed through another milestone. You can read it here at fanfiction.
And I'm just… speechless. I can’t believe how far an incredibly rare pairing has gone and how much people love that story. They tell me almost every day. 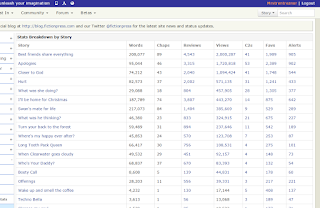 Posted by Anne-Maree Gray at 10:22 No comments: 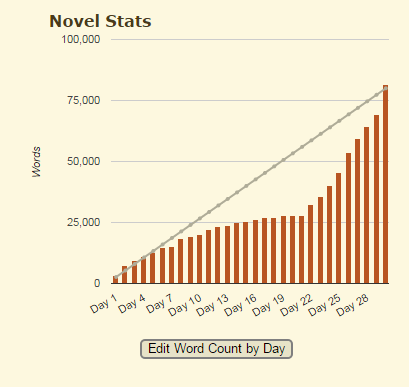 I am trashed. I wrote 43,000 words in the last eight days. The last day on that graph is an anomaly. The site knows I am in Australia but insisted that I had time left. Not sure where it thinks I am.
According to my own word count at 11:30pm on the 30th, I was under by about 4k.
Heavy sigh - only 4k?
But on the 1st it said I still had ten hours to go (honestly nano where do you think I am?) So - just to check - I collated and exported my scrivener file to Word; cut out the chapters that I had written before the camp started and voila! 81,427 in 30 days. Average of 2,700 per day.
I am a winner.
Yay. *throws confetti - waves pompoms*
It was hard to check my word count as I was working on a section of a much, much larger project. And I am honest. I could have pasted it all in and said I finished 110k words. But that would be cheating.
Plus scrivener counts any words I type in each day, so fact files and research info counted as part of my daily word count goal, but not part of my project word count, so my spreadsheets didn’t match. I can probably fix that somewhere but Scrivener is a very deep pool and I am still treading water on the surface of what it can do. Hey, I did well to NOT get all that stuff included in the final draft.
And I kept writing things in sections that were not part of the Camp project. I also tend to edit; I can’t help myself. There is a kind of nanowrimo dread you feel when a word count goes backwards. So it is only in the last few desperate days that I stopped deleting things I am not sure about and just used strikethrough on them. They still count in the word total even if they really do get deleted later. But in 80k words, it’s not a big difference.
But my cabin was a bit of a loss. We were put in a ‘cabin’; a little group of twelve so that we could cheer each other on. Four of us did that. The figures on the right are the cabin stats. Four members set their word counts and never wrote a single word or left a single message for others. ZERO. And one had a 100k target. Another wrote 1,700. So pretty much half the cabin were no-showers. There is an option to NOT be in a cabin, so I don’t understand why they did this. I get that disasters happen but surely you can see a problem early? So, as a cabin we hit a third of our target and failed miserably.
You know me, I tried to help people. But I know me, too. I was right about tricking my brain into hitting an external deadline however arbitrary. You’re weird, brain.
Now I have to clean it up, edit a little and send it all off and see if it is ‘yes’ to more.
Links:
Scrivener
Nanowrimo

Posted by Anne-Maree Gray at 08:50 No comments: