A while ago I chatted about my works in progress.

It seems as if the extension of the femslash one shot rose to the top of the pile. So I started a new group on JBNP ‘Swan’s mate for life’

Author: Mrstrentreznor
Pairing: Leah/Bella/Paul
Rating: MA
Genre/Universe: New Moon AU
Summary:The girls are happy together but Bella is curious about men. Paul agrees to help out, but things get complicated. What happens when their boy toy won’t stay in the box? They can’t go back, but can they go forward? Can they all fight for what they need? 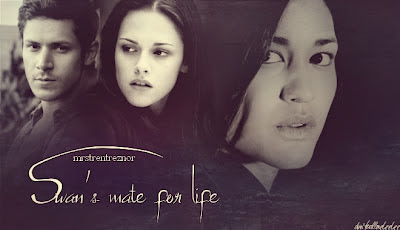 http://jacobblack-n-pack.ning.com/group/swan-s-mate-for-life
Thanks to don’tcallmeleelee from printing paws for making me the banner.

I have loaded up twelve chapters, and it is up to 38,000 words already. I have it all planned out in Scrivener, plus a large chunk of it is written; my word count there is up to 70 thousand. I still have no idea why my current writing genre is polyamory, but it is. I will start to post it on fanfic when I have finished it.

I promised my fanfic readers a long time ago that I would never start a story that had no ending; and so far, this one isn’t complete. It’s a personal thing. I HATE it when I start reading a great story and it just fades off and the author says they are bored, can’t think what to write, or have changed to a different fandom. Aagh.

According to my bar graph of writing guilt (I should copyright that lol) I have written just under 120,000 words in three months. But again, nothing finished. Gah *headdesk*

It’s going to be close.
Posted by Anne-Maree Gray at 15:32 No comments:

Lit reactor website did a flash fiction challenge this month and you know how much I love those! Any genre, max 250 words, plus a title. The inspiration was a photo.

Coffin bay
The bay was only accessible from the sea. And it was from the sea that the invaders came.

They knew the day. The wise men had warned them. ‘If they touch us, we will sicken and die.’ They believed them; they had proven themselves before.

The tall ship with the white wings approached. The canoes met it. They waved, as if at friends.

The women manned their boats. The wise men said the invaders did not value women warriors.

The invaders were pale and weak. Too long at sea. But the wise men had said they would kill them all.

The invaders did not speak the same words as they did, but they were careful to be friendly and smiling. They led it into the shallow bay. The tall ship stopped; the invaders swarmed up like ants to close the white wings. They shouted to each other.

A smaller boat was lowered and rowed to meet the women on the shore. Only one craft had landed, but they did not notice that.

Inside the cave, the creature’s eyes opened. It blinked extremely slowly. One of the women saw. She motioned to the others and they turned their boat so that it faced out into the bay.

The creature was enraged.

It exploded from the cave in a flurry of black leathery wings and fire.

The women ran and paddled for their lives. The invaders did not recognise the creature.

Fire cleansed them all.
Posted by Anne-Maree Gray at 14:20 No comments:

I am always looking for ways to be better organised. Being an eternally messy, forgetful person in real life, I have to work very hard to keep a handle on all my writing ideas as well. I have wasted precious time looking for documents or references that I swore I wrote down or had in a folder… somewhere…  more than once.

I saw a program mentioned in a few places, Scrivener. It looked pretty neat. Even better, the site offered a free download and a 30 day trial. The trial runs for 30 days of actual use: if you use it every day, it lasts 30 days; if you use it only two days a week, it lasts fifteen weeks. Once the trial expires, you can export all of your work or buy a licence to continue using it.
http://www.literatureandlatte.com/index.php
It is a Mac program but recently made a Windows version.

So, I downloaded it. As I have mentioned before, I have a problem with one of my major works, where I just can’t see how it has gone wrong. I used Scrivener for about two days before I manned (or credit carded) up and paid the US$40.

It was so worth it.

You use it just like a word processing program, but you can also view what you have put into your document in three ways.

One: as a document with all the sections in one section.
Two: as a corkboard, with index cards and coloured pins
And three: as a summary table.

You can change from one view to another with the click of a button. I look in the summary table to see where I should be working, but organise scenes in the cork board view. I can view all the chapters in the cork board, or individual scenes within chapters. I have used screenshots from my current fanfic work to demonstrate. (but being tech inept - I hope you can see them)

Your document is kept in a binder with sections for research, characters, pictures, videos, and pdf docs; everything in one place. You can open a split screen and write while you are looking at your character bio. You can look up that pdf copy of a legal document without leaving your manuscript.

I tend to write all over the place in a document. I will start at the end, jump to the beginning and then fill in the in-between. I like to keep track of how many words a day I write. It will do that for me. It will set a daily/session target as well as targets for each section and the whole document itself. And you can see them in pretty colour bars going from red to green. Believe me; getting it though the baby poo green stage is incentive enough for me. Ugh.

It has a screen writing option, where word counts are not so important.

In the corkboard mode I can see the whole story laid out. I can see at a glance; that actually, that scene ought to be before that one. And the cards can be just dragged around. I can add colour ‘keywords’ to each card to show where that keywords is relevant. I chose pink for sex scenes. lol. Or where a minor character appears. Everything seems to be tweak-able, from the pin colours, to card size, to backgrounds and screen colours. 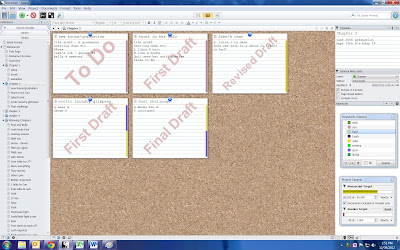 The card pins are colour organised as well; green for a scene, red for a character etc. 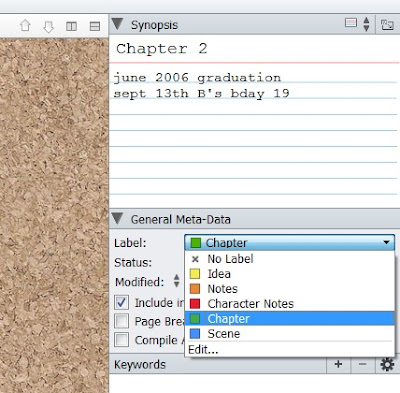 I know that I haven’t discovered half the features yet. But if I am lost, there are even video tutorials on YouTube and on their site as well. Definitely worth the money for me.

Now let me at that old work in progress!

Posted by Anne-Maree Gray at 14:40 No comments:

I’m going to give you three columns.
You have to pick one from each column.
And from that, write a 1000-word story.
terribleminds

(If you really want to get crazy, roll a d10 or pick random number between 1 and 10 from this Random Number Generator. In other words, let fate pick your choices in each category!)
The three columns (pick one from each) are:
Noir
Erotica
Dystopian
Steampunk
Mythology
Detective
Sword & Sorcery
“Weird”
Body Horror
Romantic Comedy

I let fate choose my three column choices and they were: erotica/gladiator/on the run. Typical. Lmao. At least I didn’t get steampunk/insect/love triangle. That would be a challenge.
Word count: 678
Rating: NC17

Lentulus waited patiently in the darkened cell. His body had been requested; probably a senator’s wife. It was a frequent occurrence. Given his body was not his own, he could not argue and he made a small profit from the subterfuge. The guard made more and the senator’s wife probably hoped for a strong baby. There were rumours that Caesar’s own mother had done the same. Commodus looked nothing like his father.

It was an inconvenience because Lentulus much preferred a male lover. He adored hard and muscled bodies; women did nothing for him.

The knock at the door. Door flung open without ceremony; the hooded figure entered.

A gasped breath as the figure triggered a memory. “Mercato?”

“Shhh.” The scarred hands lifted the hood back. He smiled at him.

Lentulus threw himself at his lover. A rare man in every respect; a gladiator, freed undefeated and now wealthy from his earnings. “You came.”

They kissed desperately. It had been months.

Lentulus wore only a loincloth. Mercato’s hands ran across his slighter body, looking for new scars. He found a bad one on his right shoulder. He sighed.
“Every day I prayed to the gods for your safety,” Mercato said.

“You were not here to protect me.”

“You almost lost that last bout.”

They kissed again urgently. Hands dug under clothing with no time to remove it.

“Please?” Lentulus begged. He knew just what to do. His hands reached for his lover and found him already hard. He dropped to his knees and wrapped his lips around his shaft. Mercato groaned and rocked into his mouth.

“I missed you,” he breathed. His hands locked on either side of his head; holding him still. He dragged himself away before he finished. “Need to be in you.”

He hoisted him to his feet and lifted him in his arms; pressing his back against the wall and wrapping his legs around his hips. Some spit on his fingers was all they required, and then he was working his way in; the muscle clutching and dragging at him. “Sorry,” he apologised.

Lentulus grabbed his neck and plunged his tongue into his mouth. His other hand wrapped around his own weeping erection. He grunted as his back hit the wall with each thrust. “Yes… more… harder.” He lost the rhythm as he tugged at his cock. He made a noise as he came that sounded almost like a sob.

Mercato came so hard he almost fell. He leaned against the wall, clutching Lentulus to his body; leaving bruises where his hands gripped too hard. He wanted to bury himself in his lover. Never to be separated again.

A nip at his ear broke him out of his reverie. He let Lentulus’ legs drop to the floor, so that he could stand. He watched him retrieve his loincloth and retie it. He reached out and stroked his hand down his arm.

“Come with me,” Mercato suggested.

Lentulus made a tiny nod.

“Good. Grab your stuff, your earnings, your penates* and meet me back here. I will talk to the guards.” They’d do it for him and he’d pay as well if he had to. If he needed to, he’d pay out the last of Lentulus’ contract. He wouldn’t survive another bout. The scar on his right shoulder would affect his movement. He’d buy him as a last resort and never tell him. And if none of that worked, they would run.

As long as they were together.

He waited in an agony of nerves for his return. His face broke into a grin when he saw him approach down the dark corridor.

He took his cloak off and swung it around his lover’s shoulders, kissing him quickly before he hurried him out the barred door to escape.