One of the pairings I haven’t ever done is Bella and Seth. Ooh can I cross that off my challenge list? I will have to go check. Yes, I can! There ya go wolfgirlandproud.
As mentioned in yesterday’s post, I wrote two stories for the ‘Paws and Art 3.0’ and I finally got around to posting the second one yesterday.
It’s here at fanfiction and here at fictionpad.
Because the original banner had been adopted, don’tcallmeleelee made a new one for me, too. It had to be a seductive and flirty looking Bella and Seth. I think she got that down. 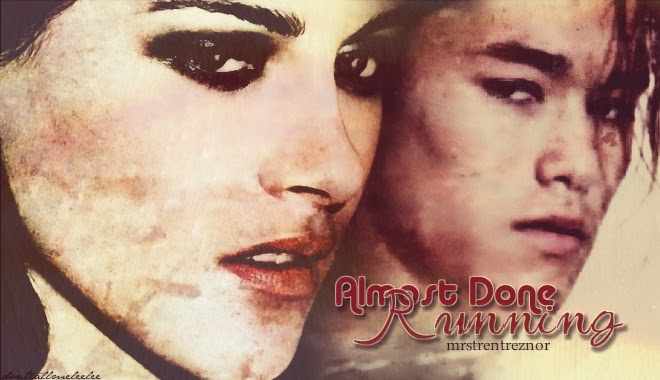 I had to mess with the ages a little to make him over sixteen, and therefore legal for sex in Washington State, and I made Bella a college dropout. Initially I had her breaking up with Jasper when he has an affair with her best friend, Alice, but Feebes convinced me to change that. I believe her words were that I would have to extend it one day and the vampire Cullens might need to visit Forks. She knows me so well, lol.
It has almost twenty five reviews, oddly most ask about the rest of the story. *faceplant into keyboard*
Cursed, I tell you… cursed.
Posted by Anne-Maree Gray at 09:36 No comments:

Kiss me out of desire 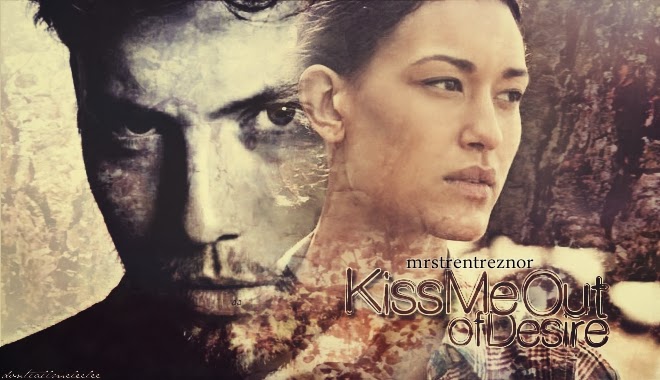 *
banner made by don'tcallmeleelee
What is it about me and rare pairings?
The ‘Paws and art 3.0’ contest had a huge number of banner entries. Eighty of them!
I subscribe to their page on an rss feed, and I kept a copy of the page so that I could access it offline and chose a Seth/Bella banner. I wrote my story and it wasn’t until after I had entered it that I realised that that banner had been adopted and removed from the competition entries. Cue panic attack. Silly me for not checking first! I wanted to support the contest; previously I have won it in 2011 and come third in 2012, so I chose a different banner. There wasn’t another Seth banner option and the point of the contest is to write to the existing banners.
I literally wrote a one shot in an hour or so and sent it in. I knew it wasn’t my best work, but I didn’t have time to do anything else as I was in the middle of nanowrimo and there were very few entries already posted. I was worried about the contest.
So I chose the banner above and wrote ‘Kiss me out of desire’. The title is a line from the Jeff Buckley song ‘Last goodbye’. The rest of the line is ‘kiss me out of desire babe, and not consolation.’ I love that line.
It is posted here at fanfiction and here at fictionpad.
Summary: Leah's deep and abiding anger attracts the attention of someone who feels emotions. Someone who is tired of control, and strict diets and suppressed libidos.
It has over fifty reviews most of which complain that they need more and I can’t leave it where I did. Bwahaha. My eternal curse!
It certainly has places that it could go but it would be a rare outing for me; I have never written fanfiction with a Cullen main character before, but I like Jasper’s darkness.
Posted by Anne-Maree Gray at 15:15 No comments:

I use Google docs (sorry, I am so old school) Google Drive to post chapters for my betas to check. We can all access a document, once I have granted them permission and vice versa for me with their documents. We can even chat if we are in the document at the same time. It’s a great system and it works well for us. We have fallen into a colour coded pattern where each of us uses the same colour so that the doc owner knows who made which comment.
My big issue with Google Drive is that it has no running total word count. I know I can press ctrl/shift/C and get the number of words in the document, or the part I have selected, but I can’t add a sentence here, a word there and a big bit in the middle and know how many words I just added.
I have searched for a long time to find something that would do that. I did find a program on greasemonkey but I don’t trust the maker and there are not enough comments from people to say whether it worked for them (or not) for me to be installing a program that allows access to my documents.
I use a program called Evernote to copy web pages. It is very neat and very useful when I am researching a topic. It is all stored in the cloud, with urls, text and images etc and I lose nothing if disaster happens. Plus, it starts to auto tag stuff. Oh, this should go in ‘fic ideas’ marked ‘succubus’. Yes, it should. Pats Evernote. It also synchs with your phone.
The Evernote ambassador is Jamie Todd Rubin, a scifi author who writes computer code as a day job. He loves spreadsheets and being super organised. Recently he shared his basic code for a Google doc word counter that works with Evernote.
I read it and it looked perfect for me. I took a deep breath. I am not techie. And I love the way that people who deal with code all the time say ‘it’s so easy’… sure, it is.
As I understand the code, you write in a particular folder. At the end of the day, the script makes a copy of what you have written and puts it into a different folder. It compares it with yesterday’s copy and counts the number of words added and posts that total into another spreadsheet under the date. It then emails to my Evernote address, a copy of what was added.
As a writer this is neat. I am always terrified that I will edit and ruin something. It would effectively give me daily backup copies. Bonus!
To use this code, I had to install goggle scripts, copy in more than a thousand lines of code on two pages and make some adjustments - my email address, time zone, document names and so on. But I couldn’t get it to work. Test runs failed at a particular line. It took me long enough to work out how to do a test run! Jamie said he doesn’t have time to help people get it to work and that is fair enough; he’s busy.
I did some research. I read up on Scripts and I changed one line of code and voila! (I had to change the spreadsheet to find by url not id#. If I ever move that spreadsheet it will fail again. Note to self: do not move spreadsheet.)
Today I got an email and a line of numbers in my spreadsheet. And I am so proud of myself.
Posted by Anne-Maree Gray at 08:58 No comments:

I was reading an article about the Goodreads author program and how they had hit the milestone of one hundred thousand authors and twenty five million members. Something made me type in one of my ISBN numbers and eek - cue panic attack - it’s listed on Goodreads. It was a freak choice that one of my seven titles was listed and I hit the right one. But unfortunately under the wrong AM Gray. It’s a common name. Sigh.
I have many skills but knowledge of US Marine Corps campaigns isn't one of them. To differentiate us, they have designated me as AM two space Gray. That is so my Native American name! It will look the same on the site. Somewhere out there may be AM three space Gray.
I am not sure that I am ready to join the author program but so be it; I'm there now. And my profile pic is the bright green absinthe porn fairy that enjoyyourjacob made for me for JBNP. Lmao. It looks good.
https://www.goodreads.com/author/show/7770708.A_M_Gray
I just noticed that I am number 146 in the list of top reviewers. Goodness me. I assume that is just for Australia. I’d be nowhere near that anywhere else.
So, yet another online place to find me. Now I am a real author and the prospect is terrifying. I suppose I should go off to write some more.
Posted by Anne-Maree Gray at 10:15 No comments:

Email ThisBlogThis!Share to TwitterShare to FacebookShare to Pinterest
Labels: Goodreads 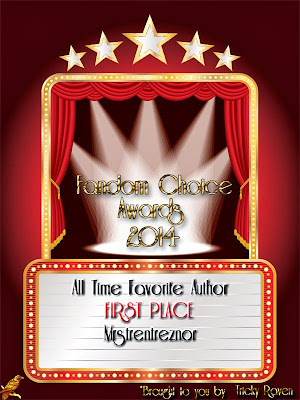 
Thank you also to the fandom choice awards site and Tricky Raven for running the awards. Great job! There were clearly a few close runs this year. Thank you also, to everyone who nominated me and voted for me.
Posted by Anne-Maree Gray at 21:30 No comments:

10 books that have stayed with me

Posted by Anne-Maree Gray at 00:00 No comments:

I’ll be home for Christmas won second prize in the best Wolf Pack Story category of the 2014 fanfic-n-tastic awards. 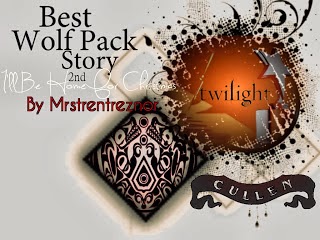 Thank you to everyone who voted for me!

Posted by Anne-Maree Gray at 16:13 No comments:

So how did I do?
1.               I wrote that novella (YAY) and half of two more novels (which sadly is not a whole novel - grin). I sent the novella out but forgot to send it to other publishers when the no reply time period was up. I think I need a literary agent who can do that for me, but I can’t get one until I finish something big and can wave it at them.
2.               I have 152 Facebook likes. I don’t know how to use FB properly and it annoys me asking me to pay for ads to contact people who have already liked me. It’s not advertising; it’s extortion. But I must remember to post there more frequently. Sorry FB fans.
3.               I wrote about 1400 words a day. I almost did Nanowrimo every single day of the year. Wow.
4.               oopsies. Still maybe two thirds fanfic.
5.               I didn’t read any more of the grammar books I bought after July. But I still think I am doing okay on this one. I did try to follow better story planning setups but there are so many of them that it confuses me sometimes. And I fell in love with Scrivener.
Basically it was an epic fail.
As MTR, I won six awards and was nominated for a few more that I have honestly lost track of. Bad mtr.
I did manage to finish the Goodreads challenge and read 80 books (21,382 pages) for the year. I did 50 last year, and set 75 as the target for 2013, so that is a big improvement. I don’t think I can do 100 but might set it at 80 and see how I go. That’s one and a half books a week.


So, I think I just have to try to be more organised; not easy for a scatter brain like me.
Posted by Anne-Maree Gray at 11:57 No comments:

twifanfiction recs for the month of December

‘I’ll be home for Christmas’ has been nominated in the twifanfiction recs for the month of December. There are seriously 46 stories and 45 of them are Bella/vampire. Bwahaha. Oh, my god… I love it! They have listed him as an original character - maybe they don’t know he’s a wolf and is Sam’s dad? I am squeeing.


http://twifanfictionrecs.com/top-10-poll-whos-who/
Posted by Anne-Maree Gray at 11:51 No comments: