Book changers was a hashtag on twitter this week. I was interested to see the books that authors said changed their lives. Laurell K Hamilton said “One hundred & One Dalmatians by Dodie Smith showed me that as long as one 1/2 of a couple holds it together you can take care of each other.” Janni Lee Simner said “L'Engle's A Swiftly Tilting Planet: For showing me the awful things don't have to happen & that the universe is filled w/light.”

I tried to remember what that book would have been for me. I really can’t choose just one. We didn’t have a television when I was a child. It explains everything, really. I read all the books in the school library and loved Tolkien’s Hobbit. I was in third grade (about 8 years old?) and I pestered the librarian until she ordered the Lord of the Rings. She swore it was too advanced for primary school children. In Australia, that’s ages 8-12 or so. I wore her down.

I read the entire children’s section at the local library… twice. I got irritated by the Ann of green gables series and Louisa May Allcott. I liked the Little house books. I read all the Nancy Drew series. I loved l’Engle but would have chosen her ‘Wrinkle in time’ story as my favourite. Introducing quantum physics to children? Awesome. When I started reading to my own children, I discovered that I went for my favourites.

The Secret Garden by Frances Hodgson Burnett. (Hard to read aloud whilst crying.)
The Crystal Cave by Mary Stewart and the rest of the Arthurian saga.
The Dark is Rising sequence from Susan Cooper.
The owl Service by Alan Garner.
Peter Pan by JM Barrie
Mary Poppins books by PL Travers
The Narnia series by CS Lewis
Sherlock Holmes stories by Arthur Conan Doyle
Anything from Rosemary Sutcliff. Although my favourite would be the Eagle of the ninth. I learnt a lot about English history from her books.
The Gauntlet by Ronald Welch. The idea that you could put on a rusty, metal gauntlet and travel back through time was intriguing.

I also read aloud the entire Harry Potter, Dune, and Hitchhikers’ guide series to my older children. At one stage, I was reading aloud every night from three different books to three different children.

The local librarian suggested to child me, that if it was okay with my mother, I could borrow from the adult section. My mother wrote a note for me and suitably permitted, I plunged into the world of adult books. I was a little disappointed first off. With hindsight, I can say that it takes a lot more effort to write a short, well put together novel than a longer one. Also adult writers can just resort to sex to fill a chapter or to demonstrate a relationship. A child or youth author has to demonstrate that relationship in other ways, and often that’s harder.

I was pleased to discover Mary Stewart wrote romances as well. I discovered Georgette Heyer, Laurence Durrell, Ellis Peters and many more. I read a lot of things I was too young to fully comprehend. I can’t even name all my favourite authors.

In senior high school English we were assigned a poem by Bruce Dawe, called the Not so Good Earth. I pointed out to my English teacher that it was clearly derived from the Pulitzer prize winning novel by Pearl S Buck, ‘The good Earth’. She didn't know it and was not pleased to be shown up in front of the class when I expressed astonishment that she was an English teacher and had never heard of it. Buck was awarded the Nobel Prize for literature in 1938.

All that reading, and I never did learn any common sense… lmao.
Posted by Unknown at 09:28 No comments:

Feeling a little sad today as I finally posted the last chapter to my epic, ‘Best friends share everything.’ It ended up being a solid 224,100 words on  fanfiction
or on JBNP if you are a member there.

The story finished up at the High School ten year reunion. I got to thinking about school and how that whole experience was for me.

I wasn’t a popular girl in High School. I didn’t date; I had braces, and I hung with the odd kids. I have heard so many people that I admire as adults, say something very similar about their youth. So sometimes I wonder. What happened to the people I thought at the time were perfect? The ones who were on the school council? Represented the school at sport? Who were the king and queen at the prom, or whatever was your country’s equivalent. I wasn’t their friend then, and I’m not now, so I don’t know. They won’t be tracking me down on Facebook for instance. I had Quil say in the story that you kept in touch with the people you wanted to from school. Clearly I ran, as fast and as far away as I could. I don’t keep in touch with any of them.

Every time I hear someone I admire for their free thinking or their imagination, talk about their youth, they weren’t one of the popular people at High School either. Even Joe Manganiello did a series of vids for the ‘it gets better’ campaign about how he was bullied as a kid. I know right? Look at him now.
It gets better video.

Lucienne Diver is a book agent and author who writes a series called ‘Vamped’. I heard an interview with her recently. She said she wrote a story about the queen bee of the school getting turned into a vampire and having to dig herself out of her own grave. This upsets her, mostly because she ruins her manicure and her hair and she can no longer see her reflection to fix it. She laughed about how annoying the character was and how she was initially written as a reaction to the beautiful people. Her character has grown on her now, clearly. If you see her photo, I am surprised she wasn't in the beautiful people category, but hey, people change as they grow up, too. (Clearly Joe did.)

I worry about people who think the pinnacle of their existence was High School. Who look back and think that that was the best they will ever be. I suspect Stephenie Meyer may fit in this category. Her obsession with youth and teenage vampires is evidence of that. Her character, Bella Swan nearly has a panic attack about turning eighteen! Meyer had to change vampire canon; make them day walkers, just so that they could go to High School and meet their lamb. Bella didn’t meet Edward in a graveyard at midnight… oh no… that would be icky. So it’s the safe, well lit world of the High School cafeteria for their first meeting.

Personally, if I was an eternal being, High School would be the last thing I would do with my endless time. And I certainly wouldn’t do it more than once, no matter how old I was when I was turned. If I was a fourteen year old vampire, I’d just argue that I looked young for my age.

If you think High School was the best you ever were, then you are in for a world of disappointment. Real life isn't like that. That’s clearly a good thing for the non-popular kids.

We didn’t fit in then, but we have learnt to accept ourselves. We have lost weight, our skin cleared up, we got our braces off, we learnt to cut our hair over our protruding ears or we found other people who think the way we do. Even if we do none of those things, it does get better… if we find that acceptance and peace within ourselves. After all, that’s who we live with. We can always leave High School.
Posted by Unknown at 17:31 2 comments:

I certainly passed a few milestones this week.

‘Best friends share everything’ clicked over to 3,000 reviews on fanfiction. The group on JBNP is the largest group they have and only needs two more members to pass its own milestone of 400 members. Not bad for a one-shot gone crazy. I also panicked early on, about offending homophobes and did way too much cutting and pasting to move it into a group of it's own. I was that worried that I was going to offend someone. Clearly got no judgement when it comes to my own work.

But the real statistic that I just cannot get my head around, is that another one-shot on steroids, ‘Apologies’ clicked past 500,000 hits on fanfic. My thanks to frlarsson who was reviewing it at that time. She does well to read and review at all, as English is not her first language, she uses a phone and google translates from Swedish.

Goldengirl from printing paws made me a new banner to celebrate it's achievement. 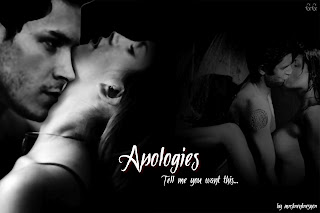 And, according to fanfic statistics, I have now posted 1,059,539 words. Given I only started posting on fanfic, in June 2010, that’s almost 50k words a month.  WHOA! And that doesn’t include my original fiction. Clearly I have compulsive writing disorder… lmao.
Posted by AM Gray at 08:36 No comments: