Pretty excited for my stories 'Booty Call' and 'The C Word' to be nominated for awards on the she wolf blog. It's a Leah-centric site. And Leah needs all the love she can get, in my opinion.

I was reading Amanda Hocking’s blog and she was talking about how vivid her dreams were, but said that she had never got a story from them. Dreams are supposed to be our brain’s way of working through things while we are asleep, but often, infuriatingly, in ways we can’t comprehend once we wake up.

I’ve had some vivid dreams lately myself. I am forming a theory that it is me being overheated by the central heating. It is winter in Australia and the heater comes on about six am to warm the house up before I get up at six thirty.  I keep dreaming that I am in the back seat of a car and the driver gets out and leaves it driverless. My effort at finding dream analyses said that the car is me. In that case, I’m driverless and out of control. Lol. I assume that this is some kind of expression of my nervousness at trying to publish my original fiction. It is a recurring dream. The driver that bails out and leaves me in the car is interchangeable, but always male. hmmm

I also had a fascinating dream, a while ago. I was at a wedding reception. I was sitting at a table with my first lover and he was with an old High School friend that I haven’t seen (or thought about in many years, nor had they ever met). An older woman was standing on an upholstered chair. The chair was covered in coffee and cream wide striped upholstery. In fact, all the chairs were covered in different upholstery. No idea why I noticed that. She had short dark hair cut in a bob. She had to keep bending at the waist to talk to people because she refused to get down from the chair. She asked me a question; I don’t remember what it was. Something like was I with the bride or the groom?
I got really upset with her and said, “I beg your pardon,” very loudly. I thought she was implying that I was old somehow. Then the guy rolled his eyes and made some comment about me being super sensitive. I said I was just upset because I was at the wedding of the man I thought I was marrying. I held out my hand and I was wearing an engagement ring. “Oh, no. Not you, too,” said the little old woman, still standing on the chair.  But then she leaned down closer to me and she said, “But that’s great grandma’s ring.”
She called out to the groom, who was on the other side of the room talking to guests with his bride. It seemed that she was his mother. My HS friend muttered something and waved out her napkin on her lap. The groom came over and he was Hugh Grant. (Note: I don’t even like Hugh Grant.) He had the bride with him, but I can’t remember what she looked like.  She seemed faceless. Then we had an argument about the rings and what he was doing marrying her? With many interjections from his mother. I don’t think I was wearing a wedding gown; I can’t remember.
Then it just clicked to another scene, without resolution. I was driving in a street; trying to park my car. I had a headscarf and sunglasses on, a la Grace Kelly. The car was a red convertible naturally. (Man, I am stylish in my dreams… lol)  The street and the shops looked old fashioned, almost as if I was back in time. Then I woke up.

So my dreams, if I remember them, are usually pretty intense. Once I woke up with a complete story in my head. It was unbelievably vivid and was about a woman packing up, running away, and buying a house. More scary was the fact that I discovered she really could have bought a house for less than $10,000 in some US states.

She starts again in a small town. The story became ‘SeaChange’. 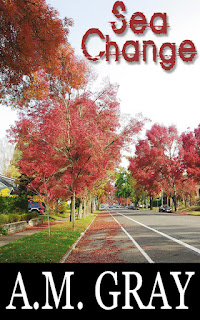 It was actually freaky weird in another sense. My brother was houseless and was sleeping on my couch for a while. I woke up, came out to talk to him and told him about the dream I had just had. He was reading that morning’s newspaper and he turned it around to show me a story. The story replicated an essential part of my dream. (Can’t tell you what exactly - spoilers).  I swear I had not seen the paper. The story was also a minor one that had caught his eye, as it was his area of special interest, but had not been mentioned on the news. Not that I had watched it or listened to the news anyway. The event described is also extremely rare, so it was not something that happened every day. Prescient dreams? Yep, had those before, too.

Weird, huh? I actually took to writing my dreams down, just in case another fully completed story fell into my dreaming mind.
Posted by Anne-Maree Gray at 10:55