I’ll be home for Christmas 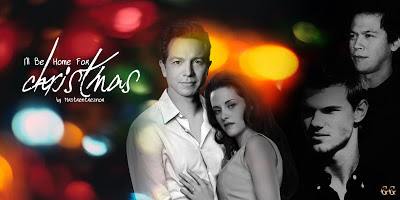 I was listening to Neil Gaiman talk the other day - I could listen to that man talk for hours… ahem, but I digress. He was laughing that the first time he sent in a manuscript to a publisher he had a belief that the next morning there would be a long black limousine parked outside his house, and that they would offer him champagne and a beautiful contract and everything would be fine.
I finished an original project and sent it in to a publisher. And, like Neil I was waiting for the limousine. Well, for something to happen. I have pushed my wordy baby out of the nest and it is scary and terrifying. What if they hate it? What if they love it? What if they never even reply? All the options are frightening.
I have retreated to the safety of fanfic. I can hear the thunder of my best friend’s feet as she runs over here to smack me upside the head. She grouses at me that I need to drop fanfic but she doesn't understand. I love it. It’s safe and comforting. So I am rolling in my favourite scent spot like a shape changing wolf *Giggle* and finishing a story that I did a pile of work on - ‘I'll be home for Christmas’. It got pushed out of the way by my last fanfic brainwave. My muse is aggressive.
Yes, it is an extension of another one shot. I know right? When have I done that before? Lmao. In any case it was the kind of one shot that got reviews like these:
·       From ShadowPast620: "It was Sam Uley. Karma was really kicking her butt today." OMG.  It's The Sixth Sense and I just realized Bruce Willis is dead.  Totally, utterly, freakin' gobsmacked.  (falls to her knees and kow tows)  I'm not worthy.  Fucking brilliant.  Thank you.
·       From niamhg: have you ever seen a small terrier dog with a rat - grabs hold of it and shakes and shakes and doesn't let go.....well I imagine us readers being the dog and let's guess who the poor rat is (maybe the person who wrote this os hehe) and we won't let go until we get more!!! This was just too good to stop there !!! sorry but you dug this hole yourself -laughs!!!!
People asked - a LOT- when it was going to be extended. I had sketched out some ideas and written nearly 35k words on it before it got pushed away, so it was time to finish it. I will try really hard not to write 200k words - AGAIN. Because I do have a huge pile of other things to write. But oddly, I find when I write fanfic that I write a whole lot of other things as well. It’s like the floodgates open.
The one shot is still posted on fanfic here and the story extension is on JBNP here. I don’t like to post things on fanfic until they are complete, and JBNP is a little more flexible for me. The banner was made by goldengirl2707 completely unexpectedly and it is perfect.