There are days when I despair of myself and my ability to knock ME off track.
To explain: I’ve been doing the Artist’s Way workbook course. It’s a twelve week therapeutic drill-down course into yourself. One of the set tasks was to eat a favourite food from childhood. Being a good Aussie kid I chose fresh bread with butter and Vegemite.
Sounds easy, right?
Not for me.
Did I go to the store and buy a loaf of fresh bread or a newly baked bun?
Oh, no.
I decided that I needed to make my own bread. I already do this. I own a bread machine and I have a giant Tupperware container that holds five kilograms of the bread mix.
Did I choose that method? Oh, no.
No, you see. I decided that I needed to make sourdough.
I have never tried this before. I do not have a sourdough starter, nor do I know anyone who does that I could steal some culture from. It’s living yeast bread. You need a little bit of the starter yeast to feed and grow before you can start making a single loaf.
So, I needed to harvest wild yeast from within the environment of my own kitchen. This is why sourdough from different places tastes different. Nifty, eh?
This, naturally, took six days.
Oh, AM… shake my head.
But, after almost a week of feeding, weighing and crooning my starter was bubbling away. I’m sure the crooning to it was an essential part of this process even if the kids did look at me weirdly.
Then to make the dough. This, also took more hours than I thought possible. Fold it over on itself four times, and only four times, cover and then leave it for half an hour. Do this for three hours.
Wait… what?
That was just one step in the daylong process. But, eventually, I made two sourdough loaves. They were crusty. They were bubbly on the surface, and they had big air holes inside. They were almost perfect, if just a little bit vertically challenged. 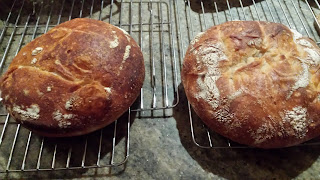 They tasted good, too.
Did this work in the way the exercise was supposed to; to transport me back to a moment in my childhood? Of course not. You don’t think my mother would have had anything as odd as sourdough bread, do you?
Links:
The Artist’s Way by Julia Cameron
Make your own sourdough