I watched ALL the Poirot

Early in 2018 I bought a complete DVD boxset of Agatha Christie’s Poirot with David Suchet.
It’s a beast. There are multiple disks on each spike. 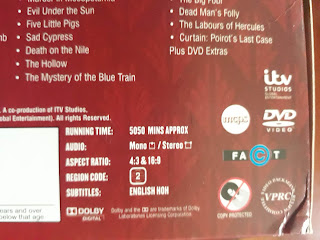 See that? 5050 minutes… almost 85 hours.
And it has taken me a little while to watch them all. It revelatory to see how the production values changed over the series; and as always it’s a game of ‘spot the awesome English actor’.
It is singularly amazing that all the main character actors stuck it out for the entire series. It would not be the same if it wasn’t the right Hastings or Chief Inspector Japp or Miss Lemon in the last episodes. Expertly played by Hugh Fraser, Philip Jackson and Pauline Moran respectively.
But more and more I see just how clever Christie was. They are amazing stories. An absolute master class in mystery writing.
It’s as if she challenged herself. I’ll make the murderer the narrator. I’ll make the murderer one of the victims. I’ll make the murderer the doctor. I’ll make the murderer all the suspects. I’ll make the murderer the investigating police officer. And so on. I’m reading ‘Talking About Detective Fiction’ by P.D. James and she laughed that all you had to do with a Christie story was pick the person most unlikely to be the murderer and you had a good chance to get it right.
Some Christie expert will no doubt swear she repeated herself, but I’m struggling to think of an example.
They focus more on the story than the method. And the thing Christie was so good at was writing these utterly appalling but somehow so English families. Decades of building anger, resentment and guilt. Adult married children still living with their parents or step-parents and waiting patiently (or not) for the old tyrant to die and leave them the estate.
Personally, I want to be Ariadne Oliver, the self insert Christie character who hates her own fictional detective. ‘Why did I make him Norwegian?’ she moans in the same way I expect Christie did about making Poirot from Belgium.