I have been nominated for four categories in the Fandom Choice Awards. 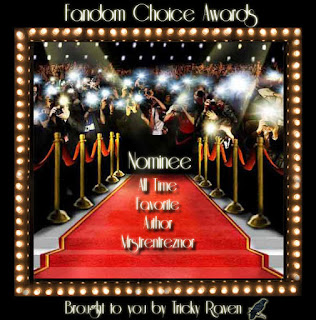 There was a limit of three nominations for each writer, with some exceptions including the all-time fave category. If you were nominated in more than that, they just took the top three, so clearly Friends beats out Apologies.

Voting is open until January 3rd and you may choose three in each category. Thank goodness, I know I had enough trouble limiting my nominations. I was particularly pleased to see 'Boys with Girlfriends' by audreyii_fic in the best Bella Swan category. It is a gender swap story, and her Bella is called Lucas. It certainly made more sense to me for Edward to be an Edwardian female.

I was also pleased to see my beta feebes86 nominated for six categories. So proud of her. She has worked really hard to push herself in her writing femslash and horror/action, both of which she has been nominated for and in the all-time fave category, as well.

There are very many great writers listed, so make sure you vote.