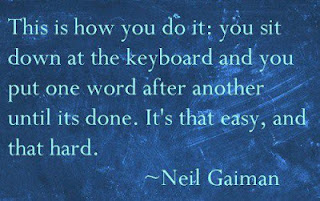 If I had been doing the national novel writing month, I would have failed. Perhaps I would have tried a little harder if I had registered, but in any case, I only wrote 43,550 words not 50,000 for the month. In my defense I wrote 41k in October and 43k the month before that.

According to the website the big three genres this year, were fantasy, young adult and science fiction. So it looks like those three are still popular with writers, and hopefully with readers.

There were some super neat offers making the rounds. Scrivener was down to $20 for Nano winners (people who finished the challenge) and 20% off for those who didn’t finish but registered. Now the tricky part is to finish it, edit it and then do something about it.

Yeah, right. Easy for me to say. *looks sideways at pile of unfinished projects*
Sighs.

I think that might actually be the hard part.

It’s always hard to hold yourself out there. To show to someone else, the thing that you have poured so much effort into.

Meanwhile, read it through again. Polish it. Edit it. Make it the shining jewel that will catch someone’s eye.

Worst case scenario? Get a cool cover made for it and load it up on Smashwords.

You just never know. And of course, with Smashwords, you haven’t actually signed away the rights to anyone else. Ugh *shudder*. I remember reading some fine print pages and backing away fast. One actually said that if you uploaded the document, it now belonged to them; even if they never ever published it. No thanks.

*I cannot find the image owner, but clearly the words are Neil Gaiman's.
Posted by Unknown at 19:48