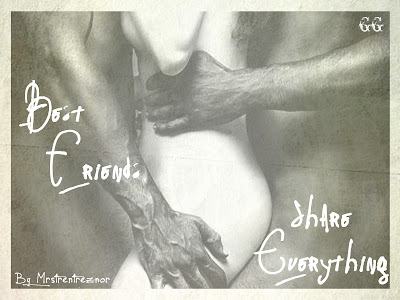 I have been spending the last day or so hitting the refresh button on my browser and watching with joy as ‘Best Friends share Everything’ moved towards a huge milestone.
One million hits on fanfiction.net.
A MILLION.

I seriously cannot get my head around it.
You can read it on fanfic.net Or at JBNP and see the banners, but you need to be a member.
Or the banners are loaded in my photobucket account.
They passed three quarters of a million in mid-October and have kept ticking over steadily since then. I don’t know what magic formula I managed to hit but most of the reviews say something like: they liked it more than they thought they would, or that they have never read threesomes, or they don’t usually read wolf stories, or they don’t usually like Bella or Quil and that this story changed their mind … it’s quite amusing.
And I have no idea what I did to get that result. But I am pleased and proud that I made people change their minds; that I wrote characters that they care about and I’m overjoyed that they love my story enough to tell me.
It has won awards for the most erotic story, the best love scene, best slash (male/male sex) and for comedy as well. My personal favourite award title is the JBNP one for ‘the Wolfish Grin Award - SLASH/BDSM - Kinkiest fuckery of all wolf types 2012.’ That made my real life friends laugh a lot.
It started off as a sexy one-shot idea and they just wouldn’t let me go. So, then it turned into a much more complex story. Being a polyamorous story there are issues with social acceptance and reactions from friends and family, as well as problems with past lovers and how their relationship affects others in their lives and, of course, the supernatural. Sex usually has consequences in my stories; I suppose that’s one of my themes.
I have a list of people to thank: every single reader (whether they reviewed or not), my betas feebes86 and ruadhsidhe, JBNP for all their support and Goldengirl who made me some awesome banners. Feebes told me ages ago that this story would be the biggest thing I had ever written.
GG loved it so much she set herself the impossible task of making a banner for each chapter. That was before it hit 89 chapters. She made me the story banner above and it is completely perfect. I love the skin contrast, the guy hands, and the fact that the girl has long hair, and one guy is bigger than the other.
It’s them. It’s Embry, Bella and Quil and it is perfect.