Paws & Art held their second banner one shot competition. There were about 15 anon entries; read them all on their site here: Paws & Art 2.0
I won it last year with ‘Rumour has it’ but this year I made an unusual choice for me. There were 65 banners to choose from with lots of cute wolf boys paired up and even a couple with three characters. So you would think any of those would work for me with a history of writing wolf boy slash and threesomes. But, I chose this banner. In a neat idea, each entrant ‘won’ an individual copy of their chosen banner. 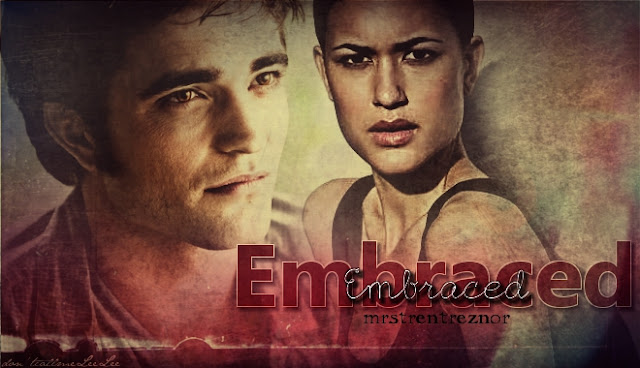 
I like challenging myself and writing different pairings; especially in one-shots, where you can get away with a lot of things because they need to be short. To me, Edward looked beseeching and Leah suspicious. What was he asking her? And the plot bunnies were off.
I have often argued that the ending of Breaking Dawn gave Bella everything she wanted and didn’t really deal with how those things affected others. Bella loved Jake so Bella got Jake in her life; imprinted on her daughter so that he can never leave. Ugh. I shudder just to think about it. A vampire mated to a wolf? The tribal alpha and their next chief living with vampires? His sworn enemies? She would probably be a neuter like most hybrids and never be able to have children. The end of the Black family line? None of it made sense to me given the book build-up to that point.
So, what if Renesmee imprinted on a different wolf? What if she did it for a reason?
Embraced BD, AU, Leah/Edward
Trigger warning: death of a character in childbirth.
(man... what is it with me killing Bella this month? I’ve done it twice. giggle) 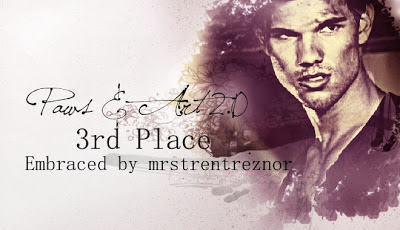 It ended up getting equal third place and I was pretty happy with that. Leah is not a popular character and pairing her with Edward was a risk, as well. Especially in a wolf centric competition. And it was anonymous, so no-one knew which story was mine. I love that!
Posted by Unknown at 18:00