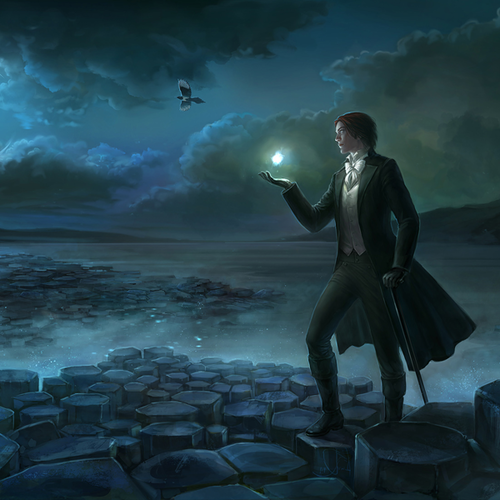 Picture Source: anndr.deviantart.com
http://writeworld.tumblr.com/post/87594443990/writers-block-a-picture-says-a-thousand-words
Clochán an Aifir - the giant’s causeway
~~~~~
The witch-light glowed as it floated gently above the palm of his right hand. His left held the head of his cane. The rocks of the giant’s causeway were slippery and treacherous and he needed the cane for stability. The last thing he needed was to fall and let the light go out.
It took much concentration to maintain the magic light for such an extended time. The night was passing quickly and he had to finish this before the dawn.
His familiar flew overhead in her preferred bird form. The kite’s eyes were better than his.
He strode over the hexagonal basalt columns looking for one in particular; an octagonal one. Using an artificial light like a lamp or a flaming torch would not help; the stone would show only under a magic flame. A kind of test of your ability. If you couldn’t even find the stone, you could not gain entry.
And that was what he wanted.
He was searching for what lay under the giant's causeway. He was searching for Finn MacCool, the man who made the causeway according to legend. He wasn’t actually a giant; the stories had that wrong. Perhaps his size had grown as his reputation did. But he did have supernatural abilities and as the world changed, he had retreated to the world of the fae. The octagonal block marked the entrance like a door handle.
A whistle from the kite and he saw it. A blink at the edge of his vision.
The kite swooped down and landed on his shoulder.
“Ready?” he asked her.
~~~~
© AM Gray 2014