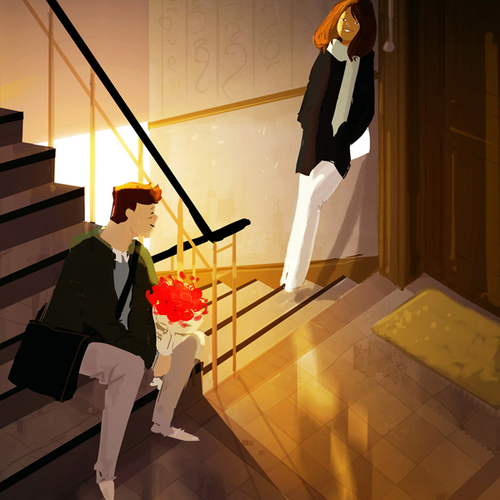 Writer’s Block
A picture says a thousand words. Write them.
Mission: Write a #story, a description, a poem, a metaphor, a commentary, or a critique about this picture. Write something about this picture.
Be sure to tag #writeworld in your block!
picture source: pascalcampion.deviantart.com
http://writeworld.org/post/104026127445/writers-block-a-picture-says-a-thousand-words
As she climbed the stairs to her apartment, she glanced to the right and saw him. He was sitting on the bottom step of the next flight of stairs clutching a bunch of flowers. He had obviously been there for a little while. Stopping in front of her door, she fumbled in her bag for her key.
She sighed, and then she spoke to him, “Are you waiting for Cleo?”
“Yes.”
“Ah...” she fiddled with her key and then turned to face him. “She’s not here. She went away for the weekend.”
“What? But she said-”
“She left on Friday afternoon.”
“But... I don’t understand, she said she’d have lunch with me.”
“She might have forgotten?” she suggested carefully, but Cleo did this all the time. She was constantly seeing men ring Cleo’s doorbell. This one, with his hopeful bunch of flowers attracted her sympathy.
“I don’t think she forgot.” He looked crestfallen. He stood, and shook himself. “Who did she go- No. Don’t answer that, I don’t want to know.”
She waited.
“Who?” he asked again, looking terrified that she would answer.
“Charlie.”
“Ah. She said they had broken up.” A pause. “I know... she lied.” He looked at the flowers in his hand as if he didn’t know what to do with them. He thrust them at her. “You may as well have these.”
“Um... thanks.” She took them but in doing so, she dropped her keys. He picked them up and handed them back to her. “Did you want to come in?” she asked him.
“For?”
Her face fell. “I was just trying to be nice. Forget it, then.”
“I’m sorry,” he said. “This has been a disappointing day.”
“Sure.”
He looked as if he wanted to touch her arm. “I apologise. Please ask me again?”
“It was just going to be a drink and probably only a mug of tea at that.”
“That would be great.” A pause. “And you could put the flowers in water.”
She gave him a tentative smile. “Yes.”
After half an hour he admitted that he had tickets for a play that night. Two tickets.
They went together and it was the start of their relationship.
He always laughed that if he hadn’t hung around waiting for Cleo that he would never have met her.
And she was worth the wait.