Home for Christmas is finished 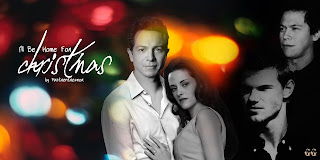 I wrote a blog post back in June 2013 about how I was going to finish working on this story. And that I would try hard NOT to write 200k words. [*banner by goldengirl]
Yeah, right…
Oopsies.
It ended up 187,764 words which isn’t 200k – just.
And it has (at the time of writing) 3,425 reviews which is HUGE for such a rare pairing. I just cannot believe it. It has overtaken Apologies and is now my second biggest story in reviews but not for views. It is way behind on views.
To explain: fanfic counts each page visit as a ‘view’ and it counts each person as a ‘visitor’ within a 24 hour period. So if they click again the next day that would be two visits from them in the month. So, on a normal day, I get 6-7k hits and about a thousand visitors. That means each person reads 7 or 8 pages. Which is good. It means that they stay or that they read a whole story while another visitor is reading the latest chapter only.
So if each person reviewed every page that they read, my ratio would be 100%. It isn’t. It’s closer to less than 1%. For Apologies for instance, it is 0.2%, but for Josh it is almost 2%. Big difference.
Josh seemed to get readers who loved it enough to review; more so than other stories. The ratio of views to reviews is much higher. Not sure why that is. Maybe it attracted the more loyal readers of mine? The ones who were willing to experiment with such a rare pairing.
Previously when I have finished a story there is a massive spike in hits as people who waited to read the completed story, read it and others may go back and reread their favourite parts. That didn’t happen with Josh either. Well a little bit, but after one story I hit 28k hits in one day. That might have been Apologies, I forget.
And the reviews are very different. They keep telling me that it is the best fanfic they have ever read. I often get ‘great story’ comments I don’t get ‘best story’.
I am not sure why that is, maybe I made them cry? I killed characters that they cared about, and that leaves an emotional shadow. A resonance that sticks with them.