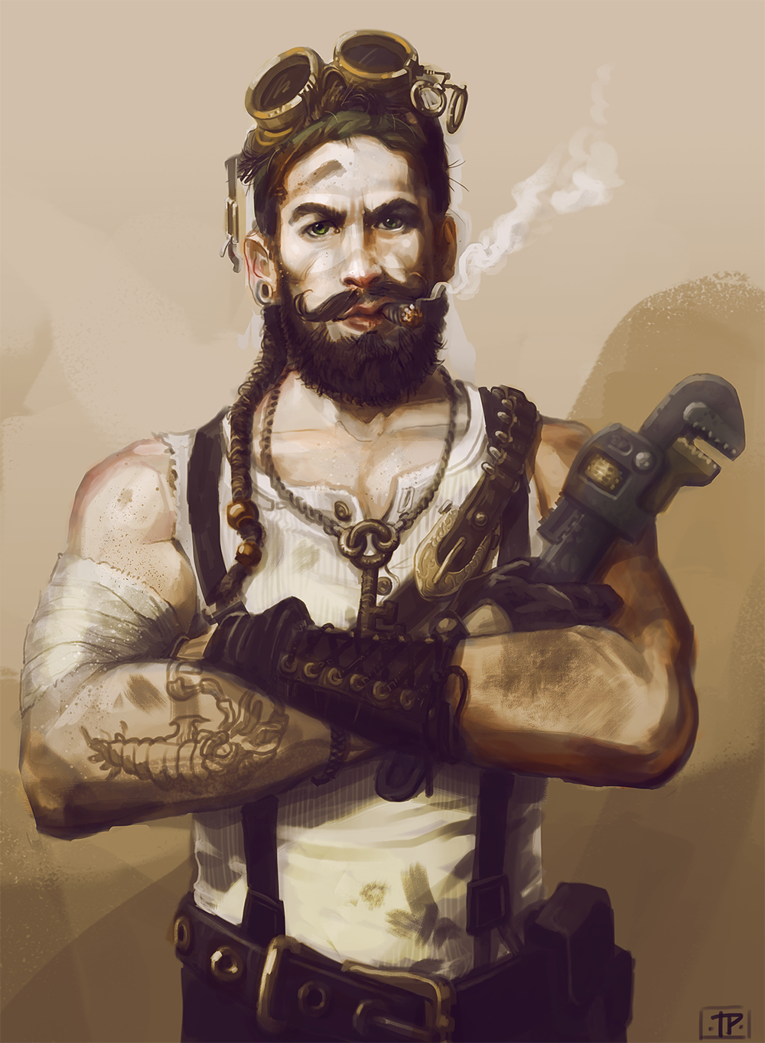 Writer’s Block
A picture says a thousand words. Write them.
Mission: Write a story, a description, a poem, a metaphor, a commentary, or a critique about this picture. Write something about this picture.
Be sure to tag writeworld in your block!
Image Source: brainleakage.deviantart.com
This is captain Duke Wyndwalker from an indie game called ‘windforge’ and the link to source is above. The kickstarter is here.
http://writeworld.tumblr.com/post/79397329335/writers-block-a-picture-says-a-thousand-words

He chomped on the end of his cigar, folded his arms - the large wrench still held in his hand - and studied her. Captain Duke Wyndwalker.
She had been escorted down to the engine room by another crew member; one who had now deserted her.
She noticed the leather braces on his wrists, the brass goggles on his head, the long dreadlock of hair down past his shoulder, the immaculately kept moustache and beard, and his clear intent eyes. “What?” he demanded.
“I need a job... on an airship,” she explained.
He raised an eyebrow.
“I get that you have an airship - I’d be a fool to not notice that!” She wanted to hit herself for saying something quite so stupid given that she was standing on the deck of one.
Silence.
“I haven’t worked on one before but I know engines.”
“Engines?” he asked incredulously. He leaned his head slightly to the side and his eyes travelled down her frock clad body to her feet, dressed in their neat booted heels. She looked as if she had barely ever left her home except to go to chapel.
“Why would I employ you?” he asked, his voice gruff and gravelly. “If you have no experience.”
“Cap’n, cops on the dock.” The voice called down the gangway. “Want permission to board.”
She startled and he noticed.
He stepped much closer to her. “Quickly now, why do you need to be airborne?”
She had to trust someone and she couldn’t say what it was that made her trust this large, dangerous looking man. “M-my uncle... he h-hurt me... so I hit him with a spanner.”
“Is he dead?”
“I didn’t mean-”
“Is he dead?” he repeated.
She just nodded mutely.
“Good.”
The wrench he passed to her to hold. He grabbed her and pushed her into the engine room. Shut and locked the door behind her. They key went back around his neck.
“Allow them up,” he called out as he strode away to the upper deck.
It took some time for the boarding platform to lower and lift them up to the deck height so that the police could board. She closed her eyes and she swore all kinds of prayers and promises. The engine wheezed and clanked and made odd little noises and she felt safe; as she had always felt safe near machines. That was part of the reason why she had reacted so badly to her uncle. He had invaded her private space and then he had tried to invade her.
Her ears strained to listen over the machinery noise.
She heard the hobnail boots on the deck as the police came aboard and the mutter of deep voices. She couldn’t hear what they were saying.
She held the wrench he had left behind and the feel of it in her hand, still warm from his; the weight, solid and heavy and familiar calmed her. Inspecting the engine, she tried to see where he had been working. She listened now, but to her; the ship. She reached out and carefully wiped off the glass on a gauge.
~~~~~
When he unlocked the door, her head was buried inside the engine. “I think it’s the tappet,” she called out.
“Yeah. That’s why I was trying to change it.”
She pulled her head out to smile at him and he stifled a laugh. The humidity of the engine room had made her hair go frizzy; wild curls were escaping from her previously neatly pulled back hairdo. Her face was flushed, dirty and she looked a different person to the one that had boarded his ship minutes ago.
She glanced down at his thick wrists and the heavy leather covering that made it thicker still.
“My wrists are thinner,” she said.
He nodded.
And that was it; she had a job and an escape. She need never set foot in a town if she didn’t want to.
~~
Later that night, she was talking to another female crewman who had been assigned to supply her with clothes and ordered to share her cabin with the newest crew member.
“The captain is so-” She stopped, at a loss for words.
“Don’t worry about it, honey. Everyone is a little in love with the Captain.”
“Everyone?”
“Everyone.”
~~~~
© AM Gray 2014