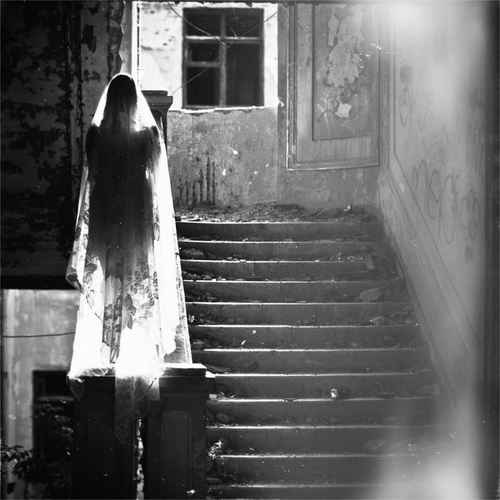 Writer’s Block
A picture says a thousand words. Write them.
Mission: Write a story, a description, a poem, a metaphor, a commentary, or a critique about this picture. Write something about this picture.
Be sure to tag #writeworld in your block!
http://writeworld.tumblr.com/post/57460807495/writers-block-a-picture-says-a-thousand-words

The psychologist cleared her throat. “I think... you have something called... Spectrophobia.”
“Excuse me?” The girl frowned at her. “What does that mean?”
Rather than explain, she just read a definition out to her. “Spectrophobia: An abnormal and persistent fear of ghosts. Sufferers of spectrophobia experience undue anxiety even though they realize their fear is irrational.”
Irrational.
Abnormal.
Persistent.
.
.
.
She didn’t believe her. Hours spent pouring out her experiences and her fears and they had been labelled as irrational.
~~~~~~
Somehow she made it out of the office. The final insult was having to pay for the advice that had upset her so badly. Her hand shook as she handed over her medical insurance card and her credit card. Lucky she didn’t have to sign; it would have been illegible.
She didn’t make another appointment. She decided never to return.
~~~~~~
Her apartment was very old and kind of run down, but it was all she could afford.
She saw her on the stairs, floating above the bannister. In the classic cartoon style she was wearing a cover over her body that looked like a sheer tablecloth rather than a white sheet.
“You’re not real,” she told the spectre. “The psych said so.”
She walked past it and unlocked her door.
The spectre passed through the wall and hovered benignly in her bedroom as she threw down her bag on her bed. “Do NOT follow me to the bathroom,” she told it.
“Oh, crap. I interacted with you. I’m not supposed to do that.” She stomped off to use the toilet. While she was in there, she did some heavy thinking.
When she came out, it was hovering near the stove. She sighed and put the kettle on. She held up teabags from her herbal tea assortment until it nodded its head.
“Peppermint, huh?”
Putting it in a large mug, she poured boiling water on it when the kettle whistled.
“So, your immune system needs boosting?” She chuckled to herself.
She placed the mug in the centre of the table and stood back to let the apparition hover over it.
“I am told you’re not real,” she repeated.
The spectre turned its blank face towards her.
“But I know...” She stopped talking. Watching the spirit, she knew if it was a figment of her imagination, that she had got so used to it that she would prefer to live with it. “Never mind.”
It turned back to inhaling the steam or whatever it was doing. When it floated away, she could drink her tea.
She sat, leaning her head on one arm as she took small sips and they studied each other.
“All right,” she said. “You exist.”
Another sip.
“And you want or need some things from me.” She lifted the mug.
“So... what do you want from me? Why me?”
No response.
“I guess I can see you, eh?”
She waited.
“Can many people do that?”
A head shake.
“Cool. So we can do yes and no questions.”
A nod.
“I like the sheer sheet thing.” She waved a hand. “That’s pretty stylish.”
That made her think.
“Maybe it’s not me; maybe it’s you. You seem to be a bit different. At least to the run-of-the-mill ghost. And plus, I can’t see any others.”
She sipped her tea.
“Spectrophobia.” She snorted derisively. “I’m not frightened of you.”
~~~~
© AM Gray 2014