I was reading an article from Bubble cow about book sales. It is a great site, full of useful information for writers/editors and has a cute cow image that is instantly recognisable in all media forms. 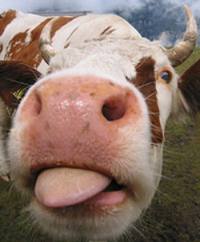 See? (So that’s what a cow lick looks like? Boom boom)

They were talking about book sales for the entrants in the Man Booker prize for 2010. Personally, I gave up on the Booker prize years ago. Honestly, if you write a book that makes your readers want to hang themselves or slash their wrists, you are a shoe-in for a nomination. I read a whole pile of seriously depressing novels when my book club decided we needed to read all the Booker prize books one year. Maybe it was the ‘thing’ for that time. Who knows? I got scarred by the experience and now drop the book hurriedly if there is a sticker on the cover that mentions the word ‘Booker’.

But at any rate, I would assume that if you were nominated for such a prize, then you must sell a few copies. They must be best sellers by definition, right?

According to Bubble cow:
“Four of the six books on the Man Booker prize list stand out as selling less than 6000 copies prior to the announcement.
Parrot and Olivier in America by Peter Carey sold 5987 in seven months,
In a Strange Room by Damon Galgut sold 1210 in five months,
The Finkler Question by Howard Jacobson sold 3505 in one month,
C by Tom McCarthy sold 2649 in one month, and
the other two titles on the short list Room by Emma Donoghue and The Long Song by Andrea Levy, sold 33923 and 15251 books respectively.

A few of us in the fanfiction world have expressed dumbfounded amazement at the massive sales figures for ‘50 shades of Grey’ the notorious EL James rewrite of a fanfic story. I had hoped many months ago that she might increase awareness of both fanfic and fanfic writers… http://amgray.blogspot.com.au/2012/03/fanfic-and-real-writers.html but, alas I was wrong. James and her publisher seem to have spent an inordinate amount of time both denying that it was a fanfic and trying to remove all traces of it from the internet. Are they insane? As if you can remove something from the Internet once it is out there?

The books has sold millions and even the new box set is selling in the high hundred thousands. Compared to the Booker entrants list, that’s very sad.

But back to Bubble Cow. When I first signed up for their website I got a lovely personal email from Gary Smailes, the head of Bubble cow. He asked me a couple of questions and I fired off a long response detailing my writing process, history and current hit rate for fanfic and ebooks.

But Gary (bless him) sent me a response. He told me that I was doing well. He actually said “doing better than most of the writers I come into contact with”. Wow. Now picture me amazed. A positive comment from someone in the ‘real’ fic world? Wow.

I just checked my sales figures and downloads on Smashwords, and I now have 13 sales and 2910 downloads. So I could argue that I am halfway to Peter Carey (or not).

Sometimes I think I am crazy to even be attempting this writer thing. But each time I get some positive reinforcement like the comment from Gary, or a writing prize like the one from Biting duck press, or an award from a popular vote like the non-canon award for Best Friends, it tells me that I am doing okay.

So I will keep trying. Wish me luck.