Anyone who knows me in my fanfic persona (alter ego?) will know I have a thing about Trent Reznor. Even my username on fanfic is mrstrentreznor. My excuse is that when I was trying to log on to the site for the first time, the Nine Inch Nails were playing on my CD player, I had tried about a dozen other usernames, they were all rejected and it accepted that one. Yeah, whatever, and I am sticking to that story. He got married about a month later - karma - she hates me… lol. Goth girls world-wide went into mourning.

But at any rate, I love his music. I love the lyrics. I love the power of their live performances. I do have yet to see them live. They don’t often tour Australia. I even like his ethos. The band offer whole album downloads for free on their website. http://www.nin.com/

I play the NIN loud in my car, with all the windows down. And I mean LOUD. I had to pick my daughter up from school one day when she was about eleven. I came roaring up and in one of those unfortunate coincidences; it was ‘Closer to God’ playing. With the unforgettable chorus line of ‘I want to f*** you like an animal’. She rolled her eyes at me as only small girls can do and announced that I was embarrassing. Bwahaha. “What’s that, honey? I can’t hear you.” lol

Trent has won an Oscar for the soundtrack for ‘The girl with the dragon tattoo’. Gah, the cover of The Immigrant song was awesome! The David Fincher video is currently streaming on the NIN website. I can forgive Karen O for not knowing who Led Zeppelin were (yes, really) if she can sing that well. That one is on my wish list. It takes me a while to save my pennies for a three CD soundtrack.

My favourite saying is: “I’m good but not cheap.” My children assure me that I am cheap and then we have a discussion about the difference between cheap and thrifty. Thrifty is good, people. But I digress.

I use NIN song names as fic titles, like Closer to God. With acknowledgement of course. (Shhh don’t tell fanfic. They would delete me for that - and HOW does that make sense? It’s fanfic. I can break book copyright but not song?)

I have used NIN lyrics as chapter titles in Hurt. I think I was too clever with that one. Most people didn’t realise until the last chapter when I explained it. I thought it would look totally neat to click on the fanfic.net chapter list and see the lyrics written out for the song. I still think it works, by the way… so just shut up.
http://www.fanfiction.net/s/7177171/1/Hurt

It was actually quite spooky how well the lyrics went with the story.

So this week I was having a discussion with a net buddy, littlefurrycannibals on the meaning of the lyrics to ‘Right where it Belongs’ from the album With Teeth. It's a sad, haunting one. Reznor poetry.

I argued that I thought the song was about the isolation of fame and maybe his drug issues. That he has made this world he now inhabits - a world that he feels is now a prison (a cave) that he can no longer leave. He is so alone and so confused that he is not even sure that any of it is real any more. He can no longer judge reality. Also it applies to the world in a matrix-like way; that we all could be living in a world of illusions. If we know that it is not real, do we take the blue pill or the red pill? Do we continue to live in our false world of illusion or do we shatter the cage, walk out of the cave and expose ourselves to things and feelings, experiences that can hurt us? Do we step out of the safe zone? To see ourselves?

She argued that Humanity had built the cages; for the weak, for the ill, for the deranged, for the dangerous and then they sat back and patted themselves on the ass, saying a job well done. All the while, the hollowness they feel is because they've cut themselves off, missing the fact that the creatures they have boxed initially, came from the same side as them. The ideologies of society are an elaborate dream. We move and function as a herd but it's what we've been told to do and the few that step out of the stampede and hold up a sign saying "Uhh, are you sure about this? What if we..." get trampled. The herd is afraid to look at itself as individual pieces that make up a whole.

We disagreed; clearly. But she played her trump card which was that I should write Harry Potter fanfic.

She based this argument on the fact that Trent Reznor is clearly Severus Snape. She offered this pic as proof. [image from cheezburger.com] 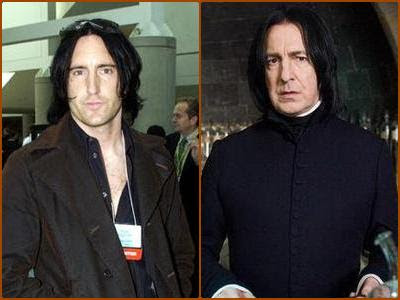