The JBNP awards were announced yesterday.

How blown away was I to get an award in nine of the ten categories that I was nominated in? Unbelievable. I truly thank everyone who voted for me.
I am honoured to be the All time favorite wolf author for 2012.

I think the one that I am most proud of is the beta award. I really like helping people get their own stories out of their heads and onto paper, as it were. I get a real kick out it. 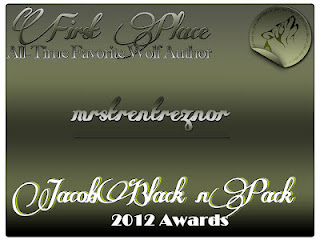 Feebes was a reader of mine who kept sending me story ideas to write. She inspired me to write a funny outtake at the end of Closer to God. We were laughing about exactly how Paul the womaniser would cope with his daughter dating. I encouraged her to write her own stories down and her first was ‘Shades of Grey’ http://www.fanfiction.net/u/2307836/feebes86

I was so proud of her when she won the favourite breakout story in the last JBNP awards. She has gone on to write other things and has won some other awards, too. Her current epic is passing 150k words and still isn’t finished yet. She (like me) likes to write the whole story before she publishes it. It is Jake/Bella. Each time she pushes herself to write things she hasn’t done before. I love seeing her develop that way.

I also beta for Ruadh sidhe. I met her on a Vin Diesel site and we became friends when I made some comments on her stories and we got chatting. She has had some issues with fanfiction.net so isn’t posting there much anymore.
http://www.fanfiction.net/u/2784897/ruadh_sidhe

She doesn’t write twilight fanfic, she writes Vin Diesel characters from his movies, including: Riddick from Pitch Black, Shane from the Pacifier, Xander Cage from Triple X, Sean from A man Apart, and Toorop from Babylon AD. She also writes original fics; with a heavy fairy bent, as in fae of the Celtic world; some dark elves and that kind of stuff, too. Her current major work is a crossover of Aliens and Riddick that has just passed 115k. And she has made some notes for a new crossover story of Riddick and Predator.

For each story, I try to do my research; watch the movie, read the book or whatever. I can’t brainstorm and help if I don’t know what I’m talking about.
They both read my stuff in return. Seems like a raw deal to me! lol. My word count is way more than theirs.

I have also helped out bmitw http://www.fanfiction.net/u/3261354/bmitw with her Gods and wolves pre twilight story. She was nominated for a couple of things recently, too and has been doing well on fanfic and a few other sites. I dragged Feebes into that one too. We needed specialist advice and she is good on the brainstorming. This one is about Ephraim and the original pack. If the Cullens had never left Forks? What issue would that have for the Quileute?

I am also trying to encourage blahblahblahinifinity to finish something she ran past me ages ago. It’s a great story concept and I really hope she gets back to it. It is a Quil story and there aren’t enough of them out there. She did have almost 10k words written and some great ideas.

I also beta’d for another writer who has given it up recently, furyangoddess. She used to write Riddick, Twilight, Supernatural and Heroes fics.

I spend a few minutes each day sending a message to anyone who joined JBNP and mentioned my name as either their nominee or in their favourite fic list. I feel if I invited them to the party, I should welcome them on their arrival. A helping hand and a kind word when someone is new can make all the difference, I think. So many people asked me how the JBNP site worked when they first joined, that I actually ended up typing out a ‘how to’ guide that I could just send them before they asked me.

I have done some pre-reading for a pile of other people. I have given writing advice to others. I often get grabbed in chat by people who want to run ideas past me.

I don’t mind. If I am busy I will just say so. I have turned down a few people who asked me to beta for them, too. I just don’t have the time to get that involved in more fics, but sometimes a really neat idea will grab me. And your beta does get involved. They have to talk you down off a ledge occasionally. Convince you not every word you have written is complete crap; assure you that people will like it, read it and review (please). They also have to know the story well enough to argue with the person writing it. No way is your main character gonna do that - no way. Back in chapter three he said he would never go there again and now he is? You had better have a reason, and a thought process laid out to convince your beta let alone all the other readers.

But I swear, some days, I think my head is going to explode.
Posted by Unknown at 11:11