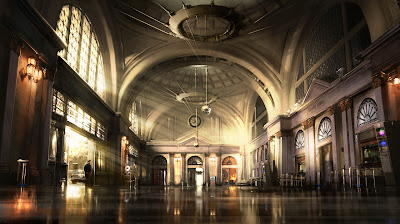 Another writeworld picture prompt - Station foyer. I searched through their FAQs and they said they don’t use pictures unless the artist has given them permission. I guess that means I can paste it on my blog, too; with credit, of course. I assume that the artists understand that people will write things to go with it and reblog it. That is the point of the exercise.
Station Foyer by~atomhawk
Who said ‘Concept art produced for Wheelman - this was planned to be a playable area of the game. Due to time constraints, this was sadly dropped.’

The Waiting room
It wasn’t empty by any means, but every time she recalled that first glimpse of him at the railway station, she saw the whole room as bare… except for him. She was waiting for him and he was therefore, the only person she saw.
She had been waiting to meet him for her whole life.
Her legs were tired after the long trip and she was sitting on the floor under the counter of a closed bookseller. Her accompanying adult had gone to the bathroom. She had refused to accompany her, in case he arrived. She was safe under there; out of sight. The woman hurried off and swore she would hurry back.
A man dressed in jeans and a worn and faded working shirt came in the entrance and stopped nervously just inside the doorway.
She knew him the second she saw him. She didn’t know why; but she knew him.
She hadn’t wanted to miss him, but now he was here, she didn’t know what to say to him. She did manage to stand and clutch her small backpack to her chest.
When her escort came back, her shoes clicking hurriedly across the polished floor, the little girl hadn’t moved. She glanced in the direction the girl was staring. She didn’t say anything, but she reached her arm down and clutched the tiny hand. Her hand felt wet from the bathroom. The child wanted to let go but didn’t. She clung to her as if she was an anchor.
A little tug encouraged her to walk.
A worried glance up was met with an encouraging smile. “It’s what we are here for,” she suggested. “To meet your father.”
A tiny nod.
They crossed the wide foyer carefully. The woman understood the girl’s nervousness. She had done this before, the child hadn’t.
She called his name as they approached and he responded. The girl heard none of this. Her whole being was concentrated on him. He glanced down at her quickly, but continued to speak to the woman.
He asked something and the woman nodded.
He crouched down so that he was on an eye level with the child. He gave a tentative smile. “Hello.”
She tried to speak but no words would come out.
He chuckled and rubbed the back of his neck with his hand. “I’ll tell you a secret,” he whispered to her. “I’m so nervous, my mouth feels all dry and clicky and my tummy is all messed up.” Another smile. “Are you like that, too?”
She nodded.
He noticed a furry ear poking out of her backpack. “Does teddy have a name?”
She nodded.
He looked the question at her.
“Teddy,” she said.
He nodded. “Seems fair.” He studied her. “While we are exchanging names, what’s yours?”
She frowned at him.
“I know what it is,” he added, “I just want you to tell me, so that I know how you like people to say it.”
She thought about it and then nodded. “Kat. With a K.” She had just decided that. Her name was written as Catherine, but she thought she needed a new one.
“Hello, Kat with a K.”
“No-” She stopped.
He grinned at her.
“Joke,” she said.
“Yes.”
She managed a small smile.
“Miss Jones has to come and see the house and make sure it is all ready for you.” He spoke to her as though it was already decided. “Okay?” he checked.
She nodded.
He rose to his feet and suggested to Miss Jones that they should go in his truck.
His hand was right there next to his thigh and she lifted her hand and slid it into his. He gripped her hand firmly, but not too tight. He stopped talking and his eyes closed in a long blink.
She couldn’t see it. His lips moved as if he was saying something and then his eyes opened again.
He smiled down at her. “You hang onto Teddy and I will hang onto you. Okay?”
“Okay, Daddy.”
~~~~
© AM Gray 2013