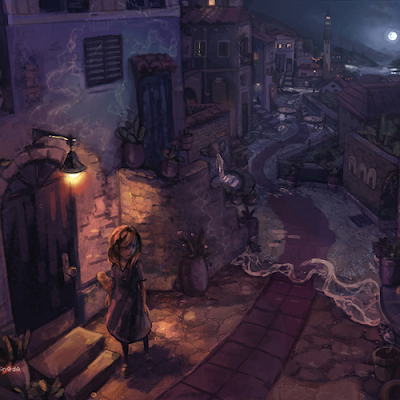 Every evening she went down to the waterfront. The bread shop closed at sunset. They sold the remaining loaves at half price. She could just afford half price. With her loaf clutched under her arm, she started up the winding hill and followed the cobbled path back to her home. Her boarding house was probably the furthest away from the water, too. She rented a room and it was cheaper the further away from the water it was.
She liked being away from the water the problem was, the water didn’t like being away from her. It followed her, up the hill - the opposite way water was supposed to flow. She looked over her shoulder and glared at it. It usually gave up before she got home. But not tonight. Tonight it was determined to shadow her.
She stopped at her bottom step.
“No,” she told it. “You have to go back. You’re sea water. You will ruin the drinking fountain again.”
It burbled happily at her feet but didn’t withdraw.
“I’m serious.”
She pointed back towards the lighthouse and the waterfront. “Go back!”
It murmured something. A susurrus of sound.
She leaned closer to it. “Swim? Is that what you said?”
“Yessss,” it agreed.
The air was not cold. She wore only a summer dress but it was too late in the evening for swimming.
“Tomorrow, if the sun is shining. I will swim in the sea.”
“Sunssset,” it insisted.
She glanced at the moon where it hovered over the sea. Almost full. Tomorrow night it would be complete. She knew the moon, the sea and the tides were linked even if she didn’t know how.
She frowned. Whatever the sea wanted, it had never hurt her. It followed her like a disobedient puppy but it meant no harm.
“Fine,” she huffed. “Now, off you go.”
“Sssweet dreamssss.”
She patted it - a reward for being obedient and watched it ebb away, leaving the cobblestones slippery and glistening in the light of the moon. She knew her dreams would be of seaweed, surf, silvery fish and darting seals.
They always were.
~~~~
© AM Gray 2013