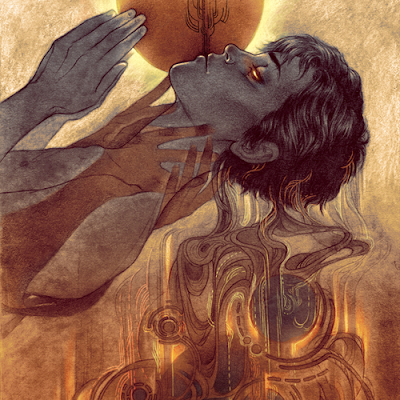 “SING!” she screamed at the tribal Elders.
“Why?” one asked.
“He’s dying,” said another.
“He’s not dying,” she insisted. “Trust me.”
She looked between their hesitant faces, latching onto the eldest. “Grandmother, please? What is there to be lost?”
The old woman didn’t answer her, but she did start chanting; a low, rhythmic song that the other voices joined. They sang together in perfect harmony from years of practise. A song without words.
She breathed a sigh of relief. The life force that she could see draining from his body was halted. He was dying, unless they sang. It pooled under his head and shoulders.
She had to touch him. She often played the drum for them and today, without one, she used his body. She slapped the rhythm on his skin as if she could push the life back into him. Force his heart to beat.
Her grandmother gave her an odd look.
And now, she added her voice to the song. It lifted and danced; singing around and over the others. She led the song and her grandmother became another follower. She didn’t notice. Her whole attention was on the song and the man they sang to.
Where her hands touched him, she could see his skin glow. Golden light echoed her touch. Still singing, she reached down and scooped up the essence in her hands. She poured it back onto his body and it was absorbed into his flesh. While they sang it did not drain away. It ran together like mercury until she had reclaimed every last drop from the earth.
His head tilted back and he gasped in a breath. His body jolted.
His hands lifted to press, palms together, in front of his chest.
Tendrils of darker energy grew upwards from his mouth; they twisted and grew into a tree. His body lifted up and floated in the air. The hands of the singers all touched him; drawn magnetically into contact. The tree grew thicker. Leaves sprouted from its reaching branches.
The song intensified; all the singers could feel the urgency. The tone lifted and the volume. Higher and higher and louder and louder they sang until with a final shout, the tree that grew from his mouth touched the setting sun and there was a flash of light.
The panting singers collapsed on the ground. His body lowered slowly down, his hands still together but now his eyes were open. Golden light poured from his face where his eyes should have been.
She watched, squinting in the glare. When his body touched the dirt, his eyes closed and the light and the visions faded.
She knew the balance had changed. She led the song now, and he? What was he?
They would find out what he was when he opened his eyes.
~~~~
© AM Gray 2013