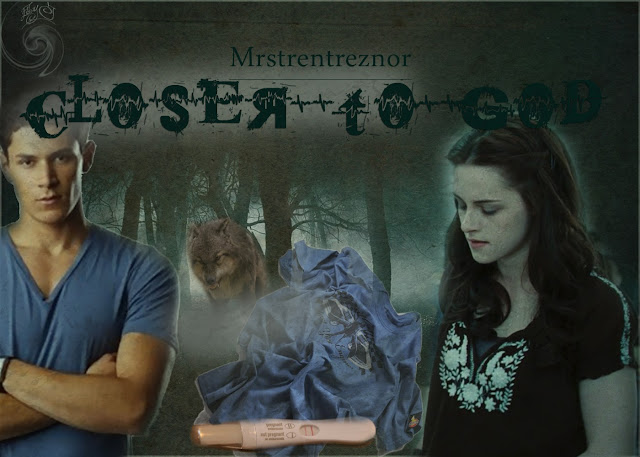 Back in 2010 when I started writing Twilight fanfic wolf stories were mostly all about Jake (what if she kissed him in the truck? Sheesh) but I was intrigued by Paul. At that stage he didn't have a surname and he seemed (to me) to be a bit more worldly than the other baby wolves. Jared and Sam were imprinted and therefore boring. I have written for Sam since then but I still get nothing from Jared.
I started writing a story where Paul was the main character and he was not a nice guy. He picked up a girl (Bella) in a bar and he marks her when they have crazy outdoor sex. He refuses to give her his name and tells her she can call him God. Thus the title and it's a NIN song, of course. I can’t remember where I got marking from; it’s a common theme in fanfic. So they are not imprinted; they don’t have the perfect imprint relationship but they are joined by the mark and then the worst happens - she is pregnant.
That was the story line for Closer to God. It has just passed 750,000 hits on fanfic and has nearly 2,000 reviews.
I called him Paul Aaron, to differentiate him from my W series Paul. I am constantly astounded by readers who tell me they love this Paul. I think he is an ass! He emotionally blackmails poor Bella. He is just horrible to her and he thinks that sex is intimacy or love. He doesn’t know how to date. He flirts with other women to get her to jump him. He knows she will do it in an attempt to prove to herself, and him, that they belong together. It becomes a game to him. But he almost loses everything when that game gets to a point where he doesn't even notice her walk out of the room. She finally grows a spine and dumps him. He gets a terrible shock. He tries to be a better person for her and their baby.
I guess that is it. The bad boy being good for someone? Redemption for the irredeemable? I don't know, but I know lots of people tell me they love him anyway; that I made them care about him, even though he is still an ass.
And plus, if I read one more daft comment on fanfic, that pregnant women couldn’t have sex… I mean… really? Again, in my wild effort to educate all the young girls out there about safe sex, wet spots and the reality of sex, I wrote 75,000 words of pregnant sex. Bwahaha. Might have overdone it a touch.

*banner made by Enjoyyourjacob
Posted by Unknown at 10:14