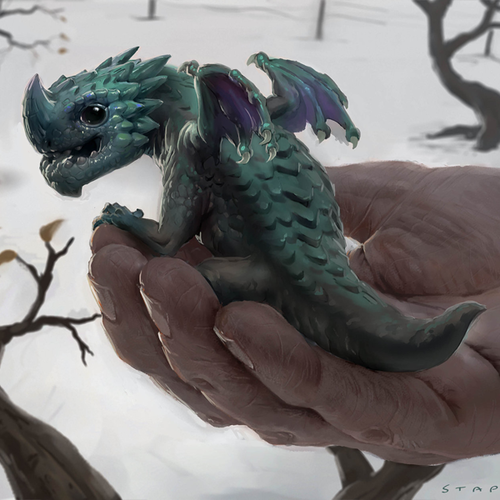 Writer’s Block
A picture says a thousand words. Write them.
Mission: Write a story, a description, a poem, a metaphor, a commentary, or a critique about this picture. Write something about this picture.
Be sure to tag writeworld in your block!
http://writeworld.tumblr.com/post/84643408036/writers-block-a-picture-says-a-thousand-words
Picture Source: staplesart.deviantart.com
Almost asleep; his feet towards the fire and his travel cloak wrapped around his body, he heard a noise. He didn’t react, just listened. Trying to ascertain where the noise was coming from.
A rock in the fire wobbled, shifted and fell over. It was one of the ones he had built a ring out of to keep the fire contained and to support his cooking implements.
He blinked.
A rock?
Moved?
In the fire?
It wobbled; it definitely moved.
There was no noise from anywhere else.
He leaned over, picked up the stick that he had been stirring the embers with and scooted the rock out of the fire. When it hit the colder air, it cracked.
He thought perhaps the rock was hollow and the heat had affected it, but then he heard another noise; a small grunting sound - very much like that of the baby crocodiles in the swamplands. The rock jerked and the crack widened.
He wrapped his cloak around his hand and scooped the rock up. It was probably a bad idea, but the worst it could do - he thought - was explode and hit him with some shrapnel.
It was about the size of one of his fists and well rounded. The noise was louder now.
He nearly dropped it when a tiny snout poked out of the crack. It had a sharp ‘tooth’ at the end of the nose that the creature was using to break open the container.
It was an egg.
An egg that hatched in fire.
Heck, no. It had to be a dragon’s egg.
The egg broke into two halves and the baby fell onto his hand. He shifted it to the other palm and studied the egg shards. Keeping the shell could be valuable; if only as proof.
The baby was resting, its small sides panting with the exertion of its escape.
“Hey, little fellow,” he said to it. It looked around and emitted another grunting sound. “Assuming you are a fellow.”
It squawked.
“Hungry, huh?”
He placed it carefully in his lap and started to use his knife to cut some meat from the carcass of the rabbit he had trapped for his own meal. It unfurled tiny wings with a claw on the end of each supporting rib. Its shiny black eye noticed the meat and it made another high pitched squeak and tried to walk on its clawed feet.
“Wait,” he chided. He kept his movements slow and unhurried. The small dragon grabbed the meat and tossed its head up to throw it down its throat. Cooked meat seemed acceptable to it. He fed it small pieces until its stomach was rounded and the agitated noises had decreased to a rumbling noise he thought might be a kind of purr. It sounded happy and content. He tried to identify the sex while it was being cooperative but he had no idea what he was looking at.
It felt hot to him but he knew it to be a heat of its own and not the remnants of the fire. He tucked it securely inside his jerkin; making sure the wings were folded and the small animal lay close to his body where it could hear his heartbeat. It warmed him through.
He checked the other rocks in the fire but could not see another one of the same colour or shape. It might be worth spending some time here investigating. Perhaps the egg had rolled down out of a buried nest; exposed by rainwater or an animal. He settled himself and he felt the creature relax, too. They would find out in the morning.
Although hopefully, he wouldn't find the mother alive. That might be an experience he would not survive, baby or no baby.
~~~~
© AM Gray 2014