The shade of seventh and tells 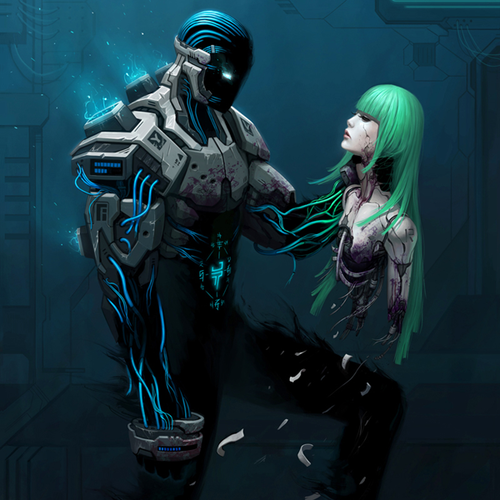 Picture Source: adriandadich.deviantart.com
http://writeworld.tumblr.com/post/89568051941/writers-block-a-picture-says-a-thousand-words
Light bound him to this plane. Light and energy matrices stapled to his frame kept him corporeal. His master had done it both to trap him here and to release the shade from draining his master’s life force to exist. But he still needed energy to live, if this caged existence could be called living.
In some skeletal remnant or echo of his life, he remained around the intersection of Seventh and Tells. He could hide. Power down and lurk in the shadows. He didn’t rest, he didn’t twitch, he didn’t need to move at all. Unless his master called him.
He waited...
Waited for a harried robotic servant to pass within his grasp. Spider like, he moved silently to capture them. And he was just as deadly. Nothing escaped him.
He drained them of their energy. Tore them apart to get every last trickle. Thrust the tendrils of his dark energy into every gap in their form.
He had no concept of pity or appreciation of beauty. He took what he needed.
And as an extra, he also accessed whatever information they carried; be it schematics of homes, offices and neighbourhoods, information about the people they worked for, and any secrets they had been told or witnessed. People tended to forget that their automatons saw and heard everything. Even though they took more space in his memory banks he stored a few images - mostly of families with blond hair. He didn’t know why he did it.
He drained them of everything and left them shattered husks.
Rumours started of a robotic shade. They called him the Reaper.
~~~~
© AM Gray 2014