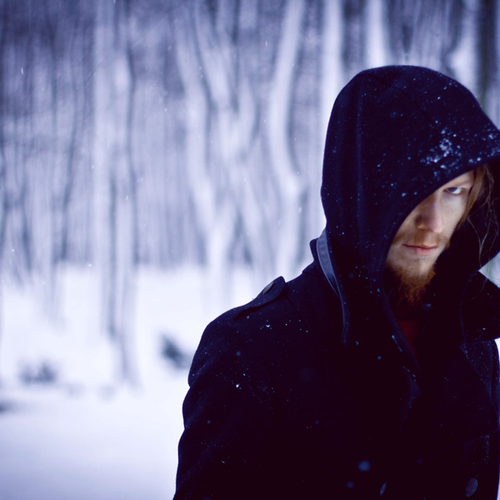 (This image is part of a series on Tumblr. Check it out!)
A picture says a thousand words. Write them.
Mission: Write a story, a description, a poem, a metaphor, a commentary, or a critique about this picture. Write something about this picture.
Be sure to tag writeworld in your block!

Picture Source: alvirdimus
http://writeworld.tumblr.com/post/75801850837/writers-block-this-image-is-part-of-a-series-on
Seelie wood
The figure on the path wore a long dark top with a hood that covered his head. In the dim light he couldn’t tell if it was black or a dark navy. As he got closer to the unmoving figure he thought it might actually be a cloak. An old fashioned kind of one that looked as if he had picked it up at some vintage clothing store.
A few more steps and the guy heard him approach and peered out the side of the hood at him. He saw a ginger beard, pale skin and piercing blue eyes. The eyes flicked down to his feet and back up and then he could have sworn that the cloak went out of focus and then changed into a more modern looking anorak.
He almost missed a step; his walk faltered a little. He must be imagining things. More tired than he thought he was.
“You okay?” the stranger asked.
“Ah... yeah.” He paused. “Did your cloak just change?”
“No. How would it do that?”
“I don’t know. It’s your cloak.”
“It’s not a cloak.”
“Not now... but it was before. I saw it.” It used to drag on the ground, he was sure of it.
The guy just stared at him.
“Well,” he said. “I should get going.” He wasn’t sure why he bothered to tell him that; a stranger in the woods.
He started walking. After a few steps, he realised the man was following him.
As a largish physically fit man he had never been concerned about someone following him before. His female friends talked about it all the time. How they were so worried about where a guy was on the street when they were walking. They would cross sides; walk on the other pavement, stop and go back if they had to, to make sure that a man was not tracking them. But he was in the middle of the forest, on a snowy track used as a cut through. He couldn’t cross the road.
He kept walking. Now very mindful of the other keeping pace with him.
They went for some distance before it got too much for him. He spun on his heel and faced the man. “STOP following me!”
The man just laughed at him.
“Stop it!”
“Am I frightening you?”
A wave of tiredness washed over him. He had had a rough couple of weeks. He put up his hand to wipe at his eyes and when he looked again, the guy was closer. He hadn’t seen him move. “How did you...?”
“I didn’t do anything.” His voice seemed strangely comforting. Hypnotic.
“Y-you... moved.”
He moved again; in a fast blur. Now he was right in front of him. He tried to step back, he really did, but he could only look at those very very blue eyes.
The man was tall; as tall as he was and he was pushing six foot five. With a head tilt, the guy gave him the once over. He felt like a specimen being studied. A hand lifted and squeezed his bicep and then the trespasser made a pleased humming noise.
“I n-need to go,” he managed to say.
“Go where?”
“Home.”
“Me, too.” Another head tilt. “Would you like to come with me.”
“I d-don’t do guys. N-no offense.”
A moue of disappointment. “Are you sure?”
“Yes?”
Another chuckle. “You don’t sound sure.”
“I ...” he stopped talking. Those eyes got to him again. He clutched harder at his backpack strap.
The redhead flipped his hood back, leaned in and kissed him.
He tasted divine. Sweet and fragrant and he found himself leaning into the kiss. But he had never kissed a man before and the facial hair brushing against his skin felt odd.
“Do you have anyone at home?” the man asked him as he brushed down the side of his face with his fingers.
He just shook his head. Life for him was single, living alone and his family were all gone or out of his life. He got a smile for that and another press of his arm.
He wanted to kiss him again. He leaned in and got another taste. And another smile.
A hand lifted and took the bag from his shoulder. He slung it across his own and reached down to grab his hand; gripping it firmly. They started to walk. As they did, the redhead lifted their joined hands to his mouth and kissed his knuckles.
“What are you?” he asked him because he knew he wasn’t human.
“Fae. The good kind,” he added.
He nodded. “The seelie wood.” That was the old name for the forest he walked through. And Seelie was another name for the good fae, he vaguely remembered. Unseelie were the kind you hoped not to meet.
“Yes.”
“So it was a cloak?”
“Yes... and you could see me. Most people cannot.”
“Huh.” A pause. “So I’m-” He stopped. He didn’t know what he was. A lot of what he thought about himself had been altered in the last few minutes.
“You are special. You have the Sight.”
“I’ve been having bad dreams,” he confessed.
“You do look tired.”
They had left the path. The trees in front of them seemed to shift to allow them through. They walked a path he had not noticed before because he would swear it hadn’t been there before.
“You need to rest. But when you do, you must tell me any dreams you have.”
“Okay. Do I sleep with you?”
“If you’d like.”
They stopped in front of a snow covered mound that seemed to glow from within.
“Hold tight, now,” he was instructed. A spoken word in a lilting speech and an open doorway shimmered into existence in the side of the mound. He shut his eyes against the sudden brightness.
A tug on his hand and he stepped forward.
~~~~
© AM Gray 2014