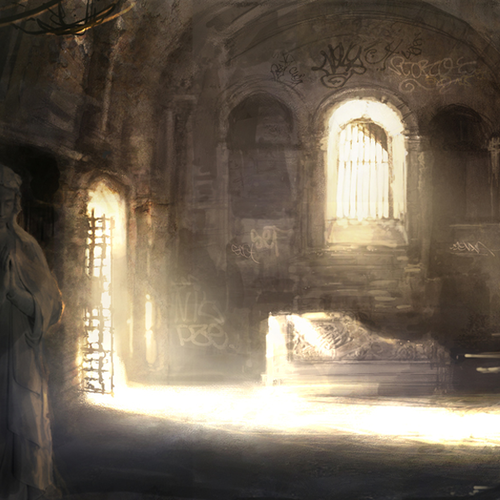 Sanctuary is an ancient concept. Guest rights. Share your bread and salt with someone and you owe them a debt. You have to protect them if you are attacked. You cannot harm them while they are in your care. If you do, you suffer for it. Karma. Bad luck. Whatever you want to call it.
Maybe it didn’t apply anymore and maybe you don’t care. You feel safer in the ruined church. More so than anywhere else. It barely had an unbroken window and certainly didn’t have a lockable door, but it doesn’t matter to you.
It was still a place of sanctuary. It was familiar.
You are old. So very old. You can remember when this church was not a ruin. When it had been full of people, lit by candles and was a place of worship. Then it had been a place of light and faith. Faith seemed to be a thing of the past, like you. Although you are definitely a thing of the past.
You stand for a while until you feel fatigued and then you sit on the floor with your back against the wall.
You stare at the altar. It is broken and graffitied, but still recognisable.
You remember nights when you stood vigil for important personages as their bodies rested in state before their burial. And further back, when you were a squire. After a cleansing bath, fasting for a day, making your confession and dressing in a white robe covered in a red surcoat (to indicate your willingness to bleed), you went to the chapel to pray all night. You would be knighted in the morning. At some point during the night, light headed and exhausted, you asked God to make you an eternal fighter for faith. God granted your wish but it took you some time to realise it.
You always needed less sleep than the others. You took more watches as a result to help out your brothers in arms.
But then your friends started to die... and you never did. You were an excellent and experienced knight but your skill could not explain everything. There were other signs; your wounds healed too fast. Your hair did not grey.
Blessed by god, they called you, and you agreed, until it didn’t stop. You tried. You were at the front of every charge, you killed countless destriers; leaving their bleeding sides under you as you attacked over and over, stopping only when you were fighting alone.
You could not die.
When the enemy understood what you were, they threw down their arms without a fight. You railed at them, screaming at them to pick up their swords and fight you. Your code prohibited you from attacking them empty handed. Mutely they shook their heads. You swore them to damnation with the creeping understanding that you were already there.
You could not die.
A paladin with no hope of entering heaven.
You couldn’t hate God but you were angry with him for a while.
Now, you were an anachronism. A knight for faith in a world where it barely existed.
Now, you waited. God meant you for some purpose and you were still waiting to see what it was.
~~~~
© AM Gray 2014