Since the closure of JBNP I only have my stories loaded at fanfic. I have looked at ao3 (an archive of our own) and joined so that I could comment on another story. Seriously, if you like Teen Wolf, why are you not reading meeranamjoker’s  ‘Witha Silver Practise’? It is Derek/Lydia and it is awesome.

But I digress… so, I could load my 71 stories onto ao3 but that might take me years and it is html editing and I HATE html. I saw an article in fictionators, I think, about a new site called fictionpad. I had a look.
They also have an info vid on YouTube
http://www.youtube.com/watch?v=1yM-7NxP2gU#t=77
I joined mostly to protect my fic name. Woe betide someone else tries to be mtr, like I dunno the real mrstrentreznor… lmao
It is in the beta phase and very much reminds me of a Twitter page. Same screen size. It fills your screen and you navigate by hovering on the RHS where a next page bar pops up. 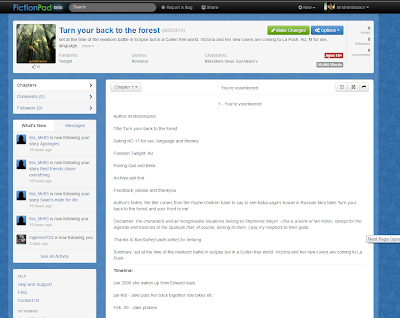 Some good things:
·       You can sign in with Twitter, Facebook or Google+
·       One button loads all stories from fanfic. I know right? It did load Closer to God twice. But I have a lot of stories and it did pretty well.
·       Works in progress are marked with a big blue spanner next to the fic name
·       One shots are marked with a green thunderbolt
·       It has an 18+ category
·       You can load banners on each chapter if you wish - I am still trying to work out the banner size for story icons.
·       Readers can click the thumbs up or leave a comment or both
·       It allows multiple characters AND multiple genres
·       Writers can PM a reviewer or reply to the review publicly. If you use an @ like twitter, they get notified.

It is very new, so all my alternate pairings meant most of my characters aren’t listed yet. But they seem cool and approachable. I am slowly working through my list and upgrading the age bracket or telling them they need to add a character.
And big plus for me. No HTML! You edit the story, click add a chapter and cut and paste it in from Word. Then click republish. It will hold it as a draft until you have it all done and click the green button. Neat!
They don’t have lists of authors yet, but the search box works well at the moment when the site is small.


If nothing else, it will serve as a backup of my fanfic stories. I wake up every day expecting my whole page to have been deleted. I do write some rather racy things… *grins*
Posted by Unknown at 09:58