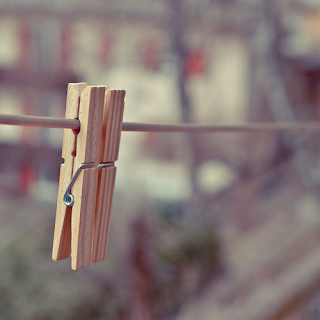 It was the pegs that were the first clue; they were wrong. Too new, too shiny. Too clean. They were still pegged to the line the way someone did when they either didn’t have a basket to store their pegs in or were too lazy to take the pegs inside. They should have been weathered and stained darker if they were stored on the clothesline.
And they didn’t fit with the house. Nothing else was new. The rest of the house had peeling paint and hanging shutters. Even a broken window upstairs. It was the house of a person who wouldn’t have bought new pegs.
The pegs didn't fit.
So, it was a trap.
He had been through several exercises and mind games already. He was tired, and wounded, but he wasn’t stupid. He never had been stupid. He had always been one of those people who noticed too many things; who thought too much. That was why he had been recruited, if you could call being chosen from all the young people of his village recruited. It was more of a lottery draw really. A lottery that nobody liked to win.
Not that anyone had ever come back to tell the village about it. Not alive, at any rate. Their bodies were returned. The lucky ones in large caskets and the unlucky ones in small urns. Sometimes he thought the urns were empty.
So far, he had been lucky and smart.
Smart was better than lucky, any day.
He hunkered down in the bushes to watch the house before he approached any further. He’d kill for a drink of water.
And today, he might have to.
~~~~
© AM Gray 2013