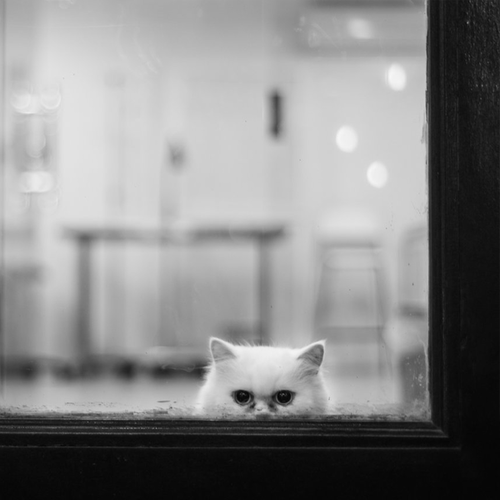 Picture Source: kulayan3d.deviantart.com
http://writeworld.tumblr.com/post/82481959813/writers-block-a-picture-says-a-thousand-words
“Cute cat you’ve got there,” said the delivery guy as he carried her box of fruit and vegetables to the kitchen.
“It’s not my cat.”
“Really?” He glanced at the window and back at the girl.
“That’s next door’s window and next door’s cat.”
“Oh. I see. The apartments go around the corner.”
“Yeah.”
“You must see a lot of your neighbour.”
“Oddly, I don’t.”
“I reckon it has adopted you.”
She glared at the cat and showed the man back to the door.
Bustling around, putting it all away, the cat kept watching her. “No,” she told it. “You can’t come over.”
It’s eyes seemed to get bigger.
“I said, NO. How would I even fetch you?”
Stare.
“I don’t even know your owner,” she protested. “I met him once at the mail box... Cain? I think.” He was in his mid thirties and she often saw him as he headed out to run..
More staring.
She shut the curtains so she didn't have to see it.
Later when she was making coffee, she noticed the lights were still on in the apartment. She peered through the curtain and could see the cat. It was now stalking back and forth in front of the window, meowing plaintively The owner had a blind, but it wasn't shut. And the light was still on. That was odd.
She tried to peer into the apartment and the cat saw her. If she had to describe how it looked, she would have said desperate.
“All right,” she said.
Putting on her dressing gown, she went over to the front door of the neighbour's apartment. No answer when she rang but she could hear the cat; it sounded quite frantic now.
“Mr Cain?” she shouted through the door.
Still no answer. She tried the handle. She rationalized that she would just make sure the cat had food and water, and then she’d leave.
She found him on the sofa. He tried to talk and couldn’t.
Before she had even thought about it, she had phoned emergency and asked for an ambulance. “I think he’s had a heart attack.”
That phrase made them move very quickly. She gave them all the details.
She let them in; scooped up the cat so it didn’t run and watched them work on him, and then load him into an ambulance.
“You are a clever cat,” she told it before taking it back to her apartment.
~~~~~~
After a couple of days she went to visit him at the hospital. “Thank you,” he said.
“It was your cat.”
“Thursby?”
“Is that his name?”
He nodded.
“Are you going to be all right?” she asked.
“It was a heart attack. I just felt really tired and drained. Couldn’t even get up to feed the cat.”
“It’s probably the jogging,” she quipped.
He gave her a rueful smile. “They said it was lucky I was as fit as I was or it might have been fatal.”
“You should have gone to the doctor.”
“I did. He told me to come back in a few days and then I was too exhausted to do it..”
She winced.
“How did you guess that’s what it was?”
“I read some pamphlet the other day when I was waiting for something. Heart attacks can be more than just a shooting pain in the left arm.”
“Thank you.”
“And Thursby.” She smiled at him. “I'll look after him until you can get home.”