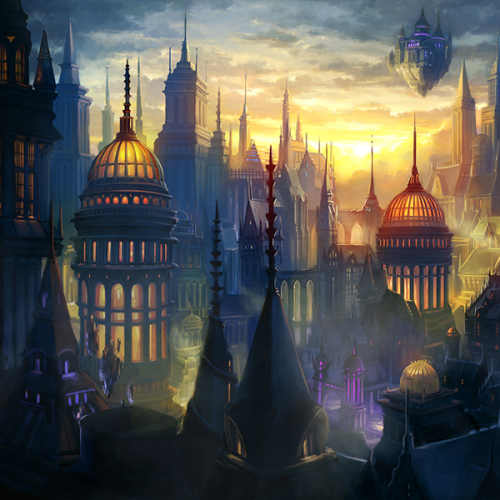 http://writeworld.org/post/104971928131/writers-block-a-picture-says-a-thousand-words
The city of Vane. He had been told it was a city of magic but he had misunderstood. Or perhaps it was just outside of his experience; he had never been to a place like this before. He stood on an external balcony of one of the higher buildings. And here height was determined by actual elevation of the building, not the number of levels in a building.
But one floated above all the others. It wasn’t as large or as fancy as some of the others. It intrigued him. They had literally separated their floating platform from the rest of the city. It hovered so far above the rest of the city that it resembled a water lily, striking out of the pond altogether to a new plane. Was it arrogance? Or did they have some other reason?
“You ready?” his host asked.
He looked at the man, dressed in an elaborate cloak with a matching high collar that covered all of his neck. Under the gown he was naked to the waist, the latest fashion, his legs in close fitted leggings and boots to just below the knee. It looked like an outfit for a horseman but such things didn’t exist in this world. Nor did the concept of physical work; at least for the upper ranks. Their powers relieved them from doing physical work. He was surprised that his host, Brax, had a body as muscular as he did.
Looking with his deeper vision, his ribbed abdomen was now flat and the chest more sunken. Ah. Brax used magic for glamour. Brax must be powerful to have the excess mana to waste, or narcissistic enough not to care. He had worked for his muscles.
“Which family owns that building?” he asked, as he pointed at the highest floating island.
A flash of irritation crossed his face, before Brax cleared his throat. “That sad little habitation belongs to the Hockets although there are only two remaining.”
When Kayseri did not reply, he continued, “Look at it... no domes, no glass or spires... just sad little conical roofs like we used to build centuries ago... they should be forced to update it.”
“Why?”
“It doesn’t fit with the rest of the city.” He huffed out a breath and folded his cloak over his chest. He acted as if it was personally insulting. “It’s a relic.”
So rank was also demonstrated by the decoration of your home? Perhaps they did not have the funds, or would not waste the mana. Or perhaps they just didn’t like to associate with everyone else?
“I quite like it,” Kayseri said.
“You would.” He spun with enough force to make the cloak hem flare. “We have a meeting.”
******
Kayseri tried to keep track of the route they took to the central dome but it was too complicated. they waited at the back of a crowd of people until the meeting reached a point where matters not listed on the agenda could be raised. Brax had to introduce his distant cousin; he should not be in the city without permission.
Kayseri was ordered forward to stand in front of a rank of senior mages.
“Who’s this?” an ancient man asked.
“Kayseri of the Kudal clan,” he introduced himself.
“Is there a problem, Lord Hocket?” the chair asked.
A croaky chuckle. “He’s here... I told you he was coming.”
This statement caused a major ruckus.
As everybody talked over the top of each other and made it impossible to hear whatever the old man was saying, a young woman stepped forward and stood right in front of him.
He tilted his head to scan her. She was magically powerful; it radiated from her if you knew how to see it.
She didn’t greet him. She didn’t speak. She didn’t shake his hand. She flung her arms around his neck as if he was a long lost lover and she kissed him full on the lips. The reaction from his body was immediate.
He kissed her back and it felt familiar although he did not know how it could. They had never met. His arms wound around her back and held her flush against him.
His mana flared and it set off a similar reaction in her. Waves of magic streamed off them both.
When his head drew back they were both breathing heavily.
“Aphenia Hocket,” she said.
“Hello.” He almost crooned it.
“Can I call you Kay?” She pressed her groin into his and he bowed her back to push it further against him.
“No.”
She laughed. “Kayseri it is, then.”
“Who, or what am I?” he asked her.
“You are my life partner.”
“I gathered that.” Plenty of women had been in his life but none had sparked that mana reaction before. And Lord Hocket had clearly had some kind of premonition; a rare magic indeed.
“And you are our saviour,” she added.
“I’m too selfish to be a saviour.”
“To put it another way, your appearance will herald a new era of magic.” She brushed some hair back from his forehead.
“One where people don’t waste mana on better abs?” he whispered. It had the added bonus of placing his lips near her neck so he kissed it.
She let out a delighted laugh. “Exactly.”
He decided her laugh was its own kind of magic. He looked up to realise the entire room had fallen silent and was watching them.
As he glanced across the crowd, they all sank to the floor in a low bow. Brax was one of the last to do so. He would remember that.


He was very glad that he had taken notice of the persistent dream telling him to go to the city of Vane. Things were about to get very interesting.
Posted by Anne-Maree Gray at 08:47