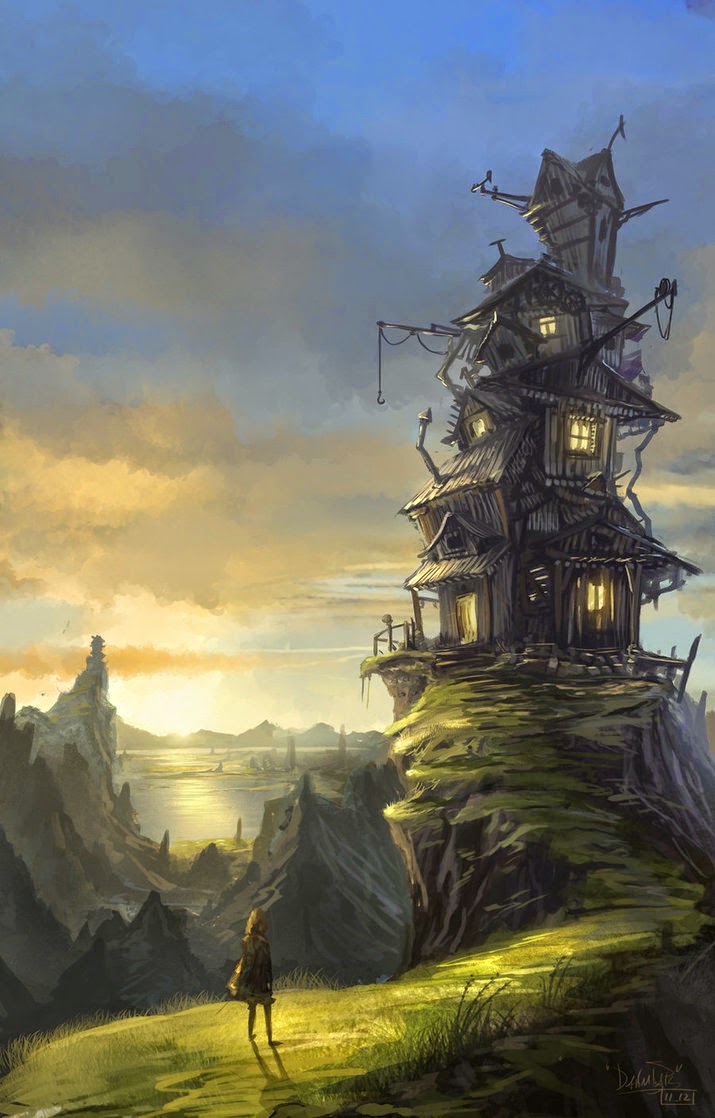 Most grandmothers lived in little houses with neat gardens, or in those homes where people dumped them when they didn’t know what to do with them anymore and then never visited them. But her grandmother was different. Different to other grandmothers but there were other houses like hers on the topmost crests of nearby hills. All built by people like her grandmother.
Witches.
They had to be magic for the houses to hold together. They were built in a ramshackle style with odd, overhanging bits and crooked pillars holding up the upper levels. Gran's hut had maybe more than seven levels.
She stood, staring at the house and dreading the moment when she had to be honest.
The door opened before she got there and the cat came out to greet her. He stood and looked at her expectantly.
“Hello, Mervyn.” He walked back to the door and then back to her when she didn’t follow him. “She knew I was coming, didn’t she?”
A miaow she took for yes.
She took a deep breath and adjusted her bag on her shoulder.
The cat looked at her again and yowled.
“Fine,” she huffed.
She hung her bag on the rack in the coatroom and then walked through to the next room; the kitchen. The large teapot, covered in its homemade cosy was already sitting on the table, steam rising from its spout. Two cups and saucers waited next to it. She had known she was coming.
“Where is he?” Cracked and old but still familiar. Gran.
The girl pulled a large toad from her bag and put him on the kitchen table. He looked disgruntled, if it was possible for an amphibian to show emotions.
“Oh, he’s a beauty. Look at you,” Gran crooned as she stroked the top of its head with the tip of her finger.
“He was a pretty boy as well,” she confessed. “He was just a...” she paused.
“A dick?” checked Gran.
“Yep. And that was the problem, I called him a toad and before I knew what had happened...” She pointed at the animal.
“I see.”
“You knew.”
“I felt you come into your power.” She patted her hand. “Don’t worry, my love, when it first comes in it can be unpredictable.”
“So I should probably be excused from school.”
An eyebrow raise. “Good try, but no.”
She rolled her eyes. “My life will be hell. He will make it hell.”
“It might be easier if we get this boy back in his normal form.”
“Do we have to? He was very annoying.”
“Yes, and you have to do it. I cannot reverse your spell for you.”
“Ugh.” She smacked her head on the table and the teacup made a chiming rattle noise.
“There’s more.”
“It will take me a long time?” she asked hopefully. He deserved to be a toad for a long time.
Gran laughed. “I doubt it, my love. You have a natural ability.”
She looked intrigued.
“This young man-,” she pointed at the toad, “-is going to be close to you for the rest of your life.”
“What? How is that fair?”
“It’s not about fairness. It’s obvious from the fact that he turned so easily.”
She frowned. “He wanted to be a toad?”
“He wanted to please you.”
“Oh bless me. He likes me?” She sounded incredulous. “Why was he so horrible, then?”
“Men.” The old lady huffed. “They are very odd creatures.” She eyed off the toad, “but we can’t leave him like that, no matter how much you would like to.” She poured the tea. “Now drink this and we will get to it.”
It took some hours but eventually a rather shocked looking young man sat at the kitchen table.
It was meal time by then and they all ate together. Magic took it out of her and she was starving. Jerome was very quiet, but he did eat with them. He could have just run out of the hut but he didn’t. Perhaps her Gran was right. Perhaps it was the heavy weight of Mervyn on his lap. It was a brave person who threw that cat off.
She and Gran made arrangements. She would need to train with her every afternoon, every weekend and every holiday. The rest of her life would have to wait. She was a witch and there was nothing she could do about it. And it was a gift; not everyone had the power.
When she kissed Gran goodnight, the old woman whispered something in her ear. She nodded and went to the door to walk home with Jerome.
At the bottom of the hill, he stopped her. “I’m sorry, I have been a dick.”
“You heard us?”
“Yes. If you want me to come with you when you come for lessons, I will.”
“You don’t have to.”
“I want to.”
She nodded. “I’ll meet you here tomorrow.”
“Okay. Good night.”
“Night.”
She watched him walk away and she remembered what her gran had said when she turned him back relatively easily. “He became a boy again, because that is what you want.”
She started to wonder if Mervyn really was a cat or just a man who liked being a cat. She caught herself thinking that she would have to tell Jerome her theory tomorrow. “I could have picked something fluffy and cute,” she snarked to herself. “A toad.” She shook her head and went home.