I listen to a podcast called Writing Excuses done by Dan Wells, Mary Robinette Kowal, Brandon Sanderson and Howard Tayler. It is worth a listen and it is only fifteen minutes long, as their spiel says. This season they are doing it as a writing master class.
You can listen to the episode here: Writing Excuses 10.1: Seriously, Where Do You Get Your Ideas?
This is my homework for this week’s episode. Mary’s work is here:

Episode 1 where do you get ideas?

Writing Prompt: Write down five different story ideas in 150 words or less. Generate these ideas from these five sources:
From an interview or conversation you've had
From research you've done (reading science news, military history, etc)
From observation (go for a walk!)
From a piece of media (watch a movie)
From a piece of music (with or without lyrics)
This exercise might not generate the very best ideas you've ever had, but it will definitely flex your idea muscles in new ways.

From an interview or conversation you've had

Someone suggested years ago that there could be Aussie shape-shifters. Today I saw a video of the last Tasmanian tiger or Thylacine. Unbelievably, it died when someone forgot to let it out of the caged area in the zoo and into shelter from the summer heat.
Tasmanian tigers didn’t go extinct. They are really shape-shifters. There is nothing like them anywhere else in the world. Being hunted, they stayed in their human form and infiltrated society. They refuse to leave Tasmania, but became environmentalists and anti-logging campaigners. Their secret is strained when… a person discovers them? A tiger saves her from drowning in the Franklin River and he falls in love with her; a non-shifter. Why her? Is there a reason?

Underwater ballroom built by crooked businessman - saw post on tumblr and looked it up.
http://www.dailymail.co.uk/news/article-2058772/Witley-Park-Surrey-The-story-Whitaker-Wright-Britains-bizarre-folly.html
A folly with a difference… oh, now I had an idea for a story set in a folly. They are such a peculiarly English thing. It was a murder mystery - but why? 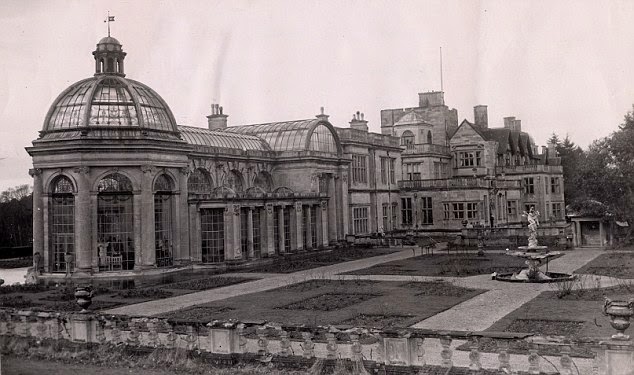 This is the house. He clearly had a thing for light - look at all those glass roofs and he was buried in a glass hearse - why? Terror of the dark? Why? What is in the dark? Is he haunted? Driven? Why? Parental abuse? Locked in the dark - he takes his revenge on all people - his finance victims are all of a type - careless men who do not look after their children. Body chemistry? Needs more light than others? The opposite of a vampire? Is there an illness that matches?
So the owner is killed by cyanide poisoning (as in RL). Someone suspects murder. His very young wife - married at 17. He was a big man - did she have a lover?  Did they kill him, or the lover who hoped to marry her afterwards did it, and then finds there is nothing left in the bank accounts. He was about to be charged with fraud; was it really suicide?
She has 2 children but they were not his and he did not care. He didn't want them to inherit his illness so she was ‘playing away’ with permission like Lady Chatterley.
Then someone else dies? Who? Why? Etc.
Who is the detective and why are they called in on this case? Or does the wife try to find out by herself? She was on a good thing, even if he was a conman. He loved his kids. Plus if it was suicide, insurance won’t pay out. They will for murder. She HAS to prove it, to support her kids in the future. Creditors can’t take the insurance money.
Does she hire a PI and they become friends/partners. Marple Junior?

From observation (go for a walk!)

Today driving along the highway there was a car waiting to pull out. Left indicator on and the three lanes of road to their left were completely empty. We were stopped by traffic and watched her, but she just sat there. Kid 1 quipped that she was having an existential moment.
What was she doing & why? Paralysed by guilt? She saw something and has just processed what she saw. Wait a second… he did take that necklace/kill his mother/replace the rat poison/ whatever. He does have a lover - he IS trying to kill me! Should I go on that diving holiday with him? He did just increase my life insurance.
What does she do about it? Where is she going? Are there consequences because she is late? She has sat there for ten minutes thinking. Doesn't snap out of it until a car beeps behind her. Who does she talk to? An old friend? What do they do? How do they protect her? And prove what he is doing?

From a piece of media (watch a movie)

Watched a bit of Labyrinth (TV movie of 2 women in different times linked by same place) today - reminded me of The Gauntlet - the children’s book - time travel by item - it’s a trope but… I’m doing my homework. *pouts*
A ring, a sword, a bowl - something functional and ubiquitous; not fancy or out of place in either time? A book mark - marks your place - boom boom? Candle stick? Letter opener?
OR does she go ahead in time? If so, why? Why her? Why now? What happens In the future that she can use in the past.
Who is the link? And why?

From a piece of music (with or without lyrics)

Hit random shuffle on itunes - got The The -deep down truth