D in d out 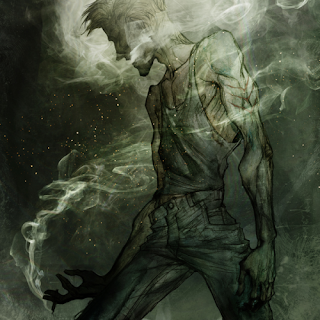 Picture Source: gunnerromantic.deviantart.com
http://writeworld.tumblr.com/post/66830688259/writers-block-a-picture-says-a-thousand-words
D was the current drug of choice. Users could be identified easily. They held the cigarette in their hands, but the smoke? The smoke they exhaled hung around their head in a whitish glowing cloud; one that took much longer than normal smoke did to dissipate. They forgot to eat. They forgot to live.
He was thin enough to be an addict so nobody questioned him. His jeans hung on his bony hips and his wife beater armholes were stretched enough to expose the bands of his ribs. The addicts had become so ubiquitous in the city centre where there were plenty of places for them to sleep at night that people barely took any notice of them. He could meander and rave and gesticulate, seemingly without purpose, while all the time, he was inexorably working his way towards the entrance.
He kept hold of the cigarette, not because he was addicted but because he was a pyromancer and he needed a flame source. He was also an assassin. He could conjure flame from nothing, but it was easier to take an existing heat source and magnify it. It would conserve energy and give him more time to fight.
He was an assassin and tonight his target was the CEO and head chemist of a pharmaceutical company. It was a very well-kept secret, but D was not a product of the illegal underworld. It had been specifically designed and manufactured by a company for profits. This company.
The addict staggered towards the entrance and snuck inside.
Only the CEO knew the entire recipe and was so concerned with industrial sabotage that he didn’t write it down. Fool.
~~~~~~
When the alarms wailed, the police hurried all the addicts out of the way of the fire engines and he quietly joined them, stubbing out the cigarette under his heel, and standing for a few minutes with the others of his ilk before creeping over to a waiting vehicle.
“How did all the addicts survive?” his driver asked as they pulled away from the kerb.
He glanced at them, huddling to the side. “They have been through enough.” And more when their supply ran out.
“You’re getting soft.”
“That D stuff is vile.” A glance in the mirror showed the building was well alight. It looked like a job well done. And arson investigators would never be able to identify the fire source.
This was one job he would have done for free; not that he had. His fees were high. He’d need the money to pay for the detox and health clinic. Very secret and very secure. Just as well, he was hungry. It would take him as long to recover as it had to starve his body into this state.
~~~~
© AM Gray 2014