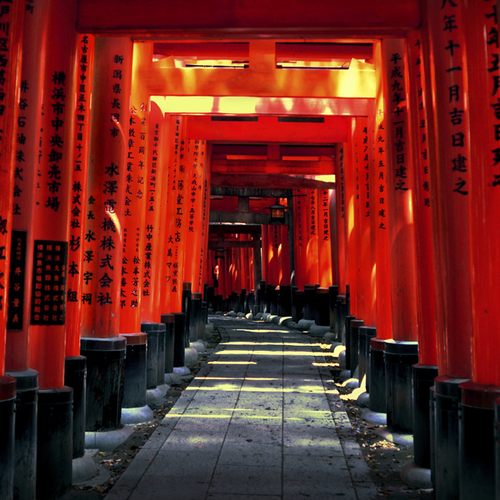 Source: david-plus-1.deviantart.com Fushimi-inari, Kyoto
http://writeworld.tumblr.com/post/59022069050/writers-block-a-picture-says-a-thousand-words
“This is an inari shrine, right?” she asked.
“Oh, yes. Says here on the brochure, that it is one of the oldest in the world. Dates back to 711.”
“Seven eleven?”
“The year, not the store.”
“Oh.” She snorted.
“What’s so special about Inari shrines?”
“Their messengers are usually kitsune. Didn’t you notice the statue of that one at the gate holding a key in its mouth?”
Kitsune were magic fox spirits. Once they reached an age of more than one hundred years, they grew an extra tail - anything up to nine - and they acquired the ability to take on a human form. They were smart, loyal and the older they were, the more skills they had.
She frowned at her friend. “A kitsune.”
“Yeah... what a coincidence,” she tried to sound breezy.
“It is no coincidence at all.”
“I do not know what you mean-”
“You do! Is that why you suggested we come here?”
She tried to look astonished and failed. Her face fell. “I... miss him.”
“How? You were together for one night and it was months ago.”
“Gah!” She waved her hands in the air. “I know... and it was utterly amazing!”
“You are hopeless.” Her friend sighed. “So tell me why we are really here.”
“I did some research after he told me what he was.”
“Uh, huh.”
“The oldest kitsune are white or gold and they can see or hear anything anywhere in the world.”
“Right. And assuming we actually manage to find one, you want to ask them what?”
She bit her lip.
“Oh, heck, honey. You have got it bad. You want to ask them where he is!”
She waved her hands in a dismissive gesture. “Male kitsune are very rare; they must have heard of him.”
“Utterly freaking hopeless. I mean, really... was he that good?”
Her friend blushed. “He was-” She gave a whole body shiver. “He was that good! And I wanted to ask about something-”
“Tell me you used protection!”
“Of course we did.”
“So what is this extra thing?”
“He... ah... how can I say it... he scratched me.”
“I do not need to know your kinks-”
“It hasn’t really healed.”
“Jesus. We should be at the hospital; not the temple.”
Over her friend’s shoulder, she noticed a very old Japanese woman watching them. She was shamelessly listening in to their conversation. Her skin was wrinkled and her hair was stark white.
Without saying a word, she grabbed her friend’s shoulders and just spun her around. “Check that hair.”
She heard her suck in a breath. “White.”
She took the opportunity to peer inside the neck of her friend’s shirt while she was distracted. “Crap! Look at that. He really marked you up.”
The old woman started to shuffle towards them. She was in traditional Japanese dress of a kimono and she was wearing wooden zori; the thonged sandals. It took her a long time to reach them. They were both so unsure of what to do that they just stood there and waited for her to approach them.
The old woman took the hand of her friend and tugged her along the path. “Come,” she said.
They went; it never occurred to them not to.
The old woman folded the young woman’s hand over so that her palm lay on top of her arm. She patted the top of it with her other hand. “You came,” she said.
She was a little confused. “You knew I was coming?”
Her English was perfect. “I see all.”
The girl walking with the old woman glanced back over her shoulder. The girls exchanged a glance pregnant with meaning. See she mouthed at her.
Her friend looked down at the old woman’s legs. Under the kimono she was sure she could see something moving. A tail? Maybe nine of them? This was a crazy scheme but she knew her friend and she knew she had genuinely made a connection with the guy she had spent a whole night with. But the scratches worried her and the only way to understand why they hadn’t healed was here.
And there was no way she was leaving her here; not alone. She muttered some swear words under her breath and then hurried after them.
Into the foxes’ den.
~~~~
© AM Gray 2014