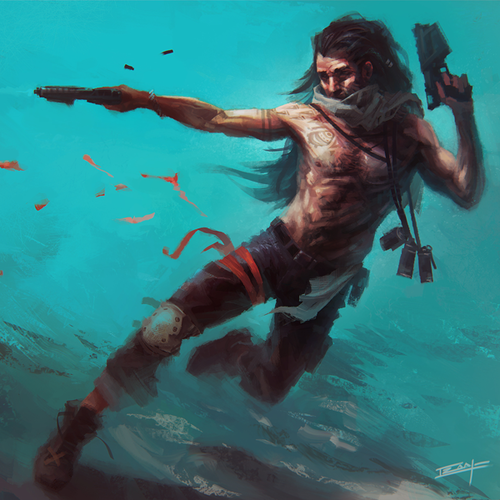 Picture Source: apostolon-iam.deviantart.com
http://writeworld.tumblr.com/post/71970738494/writers-block-a-picture-says-a-thousand-words
The game was televised. Well it wasn’t really a game; not for the people put inside the bio-dome. For them it was life or death ... mostly death.
The viewers laid bets on who would survive. They were down to six from the original twenty four. And one guy was getting all the attention. And a lot of large bets had been put onto him in the first days; before his abilities showed and when the odds were higher against him.
He had hair down to his waist; a dark tousled mane that he left loose. The swarthy stubble grown after a couple of weeks in the chamber got a lot of attention from the ladies, too.
The commentators were starting to think that he was milking this event somehow. Not that they could tell what he stood to gain from it. ‘Players’ were randomly selected, if you could call taken off the streets by the police when their ID number came up. Best case result was that he survived. No one could know when their turn was coming up. No one could prepare for such an event.
But prepared he was. He was fit, strong and intelligent. As if he had studied for it, somehow. He knew the kind of hiding places where they usually hid the ammunition supply kits, and the first aid boxes. If he didn’t carry them himself, he hid them in his own hiding places. And he set traps.
He robbed the bodies of the dead and took anything they had that was valuable to him. If they had nothing he took some other kind of item. A couple of things he wove into his hair; beads, rings or rags cut from their clothes. Trophies.
He seemed to be playing it up for the camera. He knew where the fixed ones were located. He had a flair for the dramatic. If he was moving, the camera was following him in preference to the other occupants.
Today he leapt out, running up a wall in a parkour move, leaping over crates and shooting at the other player. Gun held to the side in a move that any firearms expert would tell you was more artistic than functional. The hot shells tended to hit you if you shot from that position. Not that he seemed to care.
He wore only boots and jeans, slung low on his hips with a white towel stuffed in his back pocket like a flag. The camera certainly picked it up. Just to make sure, he had red ribbons tied around his upper thigh. They looked like a tourniquet. That sparked a lot of discussion about whether he was injured or not. The final consensus was that he wasn’t but by then the discussion boards were full of his name.
Today, his shirt had been removed and was wrapped around his face, to limit the amount of gas he inhaled. This particular room had noxious gas piped in at a low level but he had wrapped up his face and burst in running up the walls. One less competitor.
On a leather thong around his neck, he had hung a few smoke grenades. No one knew where he had found those.
His shirtless state exposed a number of tattoos. By the next day all the televised chatter was about how many tattoos he had and what they might mean. He was now the clear favourite.
The organisers were starting to worry how they would handle him when he got out and stepped up onto the winner’s podium. One thing they could be sure of was that he would do whatever worked best for him. He was the wildcard. And they could not bet on what he was going to do.
Whoever had laid all those early bets was going to make a killing, unless, of course, they already had.
~~~~
© AM Gray 2014