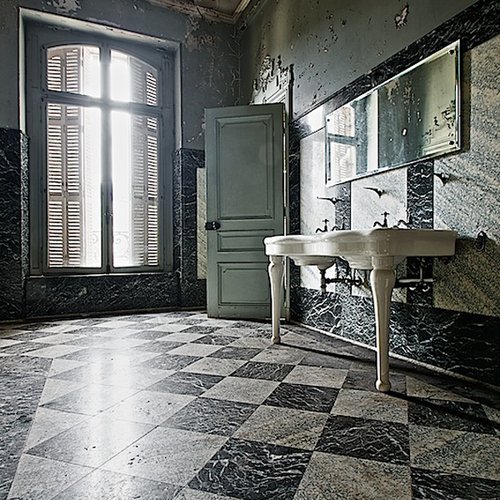 Picture Source: zerberuz.deviantart.com
http://writeworld.tumblr.com/post/98097501091/writers-block-a-picture-says-a-thousand-words
~~~~~~
Peeling his eyelids apart he looked blearily around. Moving his head hurt. Weird... everything was in black and white... oh, wait... it was just this room. He waved his own hand in front of his face and it looked pale but still pinkish. Situation normal. It was just this room that was all muted shades of grey.
The light coming through the open shutters made his head hurt, too.
Party... had he been to a party? He couldn’t remember. He must have had a really good time.
“Ugh,” he groaned. His back hurt and he shifted painfully. It was leaning on something hard and cold; the bath. No wonder; he had been asleep in the bath. Weren’t there any beds in this house?
Was it a party? Was it in this house? Who’s house was it?
That was weird. He didn’t remember coming here, let alone how he ended up asleep in the bath. Tacky, dry mouth made him look longingly at the taps. When he sat up he nearly fell down again. Ugh. Sharp pain in his head. That hurt.
And his left arm was hard to lift and useless. He peered at it myopically. It was manacled. A large, metal band went around his wrist and -- he glanced over the edge of the bath to the floor-- and it was bolted to the tiled floor. What the Hell? He spent too long waving around that hand and still not being able to comprehend it.
He tried to speak but his mouth clicked with thirst. He shuffled down the bath and worked at the tap. It wouldn’t turn.
Maybe just as well. When he thought about it, if he had turned it on he would have worn the water rather than drunk it, still sitting in the bath. He eyed off the basins against the wall. He clambered out and clanked over to try one and got some rusty water out of it. It ran clear after a while giving him the impression that it had not been used for some time. The shelf above the sinks was missing. The brackets remained.
Now, his thirst quenched, he noticed the paint peeling from the walls.
The house was clearly abandoned... but why? Why was he here? Why couldn’t he remember? And why was he chained up?
And then he heard the front door open...
~~~~
© AM Gray 2014