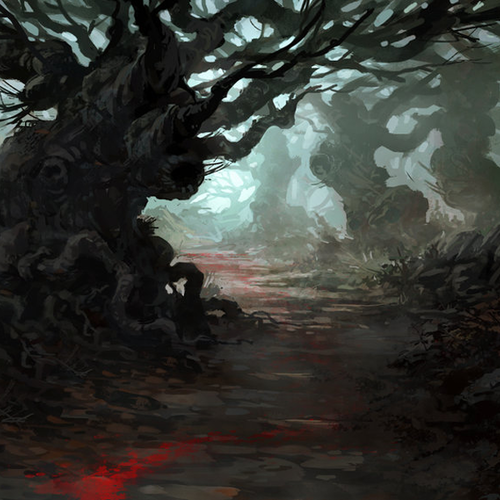 Writer’s Block
A picture says a thousand words. Write them.
Mission: Write a story, a description, a poem, a metaphor, a commentary, or a critique about this picture. Write something about this picture.
Be sure to tag writeworld in your block!
http://writeworld.tumblr.com/post/81940952889/writers-block-a-picture-says-a-thousand-words
Picture Source: spex84.deviantart.com
“They call it the bloody forest,” he announced ponderously.
“But that’s just a name… right?” She peered into the edge of the forest and saw the red liquid that seemed to run down the centre of the path.
He lifted an eyebrow.
“It’s not… actually blood?” she asked.
“Does it look like blood?”
“Y-yes.” She still looked nervous.
Silence.
“But it can’t be,” she argued.
“One story is that there was a battle here. A huge one with thousands of fighters. So many that their spilled blood still pours out of the ground.”
She gave him a sceptical look. “Trees,” she argued. “Big trees.”
“It must have been a very long time ago for the trees to grow this big.”
“That’s what I just said.”
He grinned at her. “Right.”
They still hadn’t entered the forest.
“Do we have to go through it?” she asked.
He shrugged. “We could go around... but it would take days longer.”
Her feet shuffled in her agitation. “Have you done it before? Walked through the forest?”
“Now she asks.”
“Pfft.”
With a second glance at him, she took a decisive step into the forest.
He noticed that she stayed out of the liquid.
He followed her in.
“Don’t step in the blood,” he warned.
She smacked him on the upper arm. “Stop teasing.” But as she stepped back, she stood in the liquid. “Oh... now I’ve got it on my shoes.”
“Ooh... that doesn’t wash out.”
“Her face twisted in distaste. “What is it? Really?”
“Iron. But it still doesn’t wash out.”
“I hate you.”
He chuckled. “I know. You told me last week.”
She trudged on in silence. He gave her a gentle push, or pointed where they needed to go. Mostly there was no choice; just one path - winding through the trees and little used by the look of it.
“No one lives in here?”
“No.”
“Too dark?”
“Yes.”
Her nerves were making her chatty.
“But it is a forest.”
“And?”
“Something must live in here.”
“True.”
He got a look for that.
“Nothing too large,” he added.
“No rodents of unusual size?”
“Not as far as I know.”
“Uh, huh.”
Silence for some time as they walked and her breathing started to get laboured.
“Do you want to stop?” he asked her.
“No.” A pause. “It unnerves me,” she added.
He frowned at her. “We can stop for a few minutes.”
“No.” Another pause. “Thank you, but I just want to get out of here.”
Handing her the water canteen without comment, they stopped - standing in place while she got her breath back.
He waited until she started to walk again before following her.
Some time later, her breathing was strained and he was watching her so closely that he didn’t see when the figure leapt out of the undergrowth and grabbed him.
~~~~
© AM Gray 2014