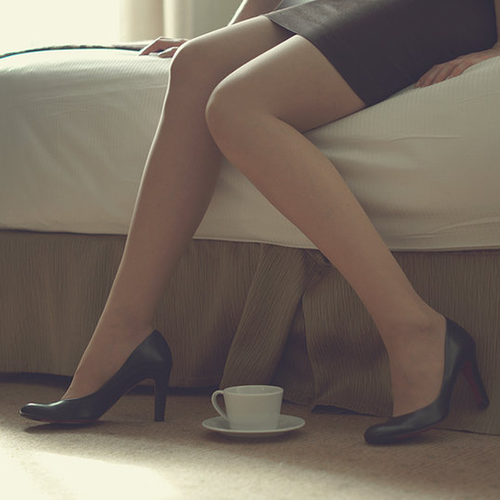 Source: forgotten-tale.deviantart.com
http://writeworld.tumblr.com/post/93497873000/writers-block-a-picture-says-a-thousand-words
“Put the cup down,” he said.
Perched on the end of the hotel bed, she was some distance from both the side tables. But she wanted to obey him so she bent down and placed it on the carpet between her feet. Then she put her suddenly sweaty hands down onto the surface of the bed.
He noticed her do it. Of course he did. She was starting to suspect that he noticed everything she did. And she had never realised.
“Did you wear that skirt for me?”
“Yes.”
“The shoes?”
“H-how do you mean?”
“They are higher than you normally wear.”
“Yes.” He did notice everything.
“It changes the way you walk.”
She wasn’t sure that required an answer.
“Walk for me.”
She stood, smoothed her skirt down her thighs and stepped carefully around the discarded cup. Incredibly aware of his scrutiny, she walked over to the window, pivoted on her sole and walked back. Her heart was beating rapidly. The blood pumped noisily in her ears.
She stopped and waited for further instructions.
“Perfect,” he said.
He crouched at her feet and collected the cup before standing and ushering her towards the door. He unlocked it and she went before him out and back into the hotel suite and the party. She was completely aware that he was behind her and that more than a few guests looked their way.
They had not been gone long enough to do anything; their clothes were not disarrayed but still people noticed their return.
One woman had a look that it took her a while to decipher.
And then she understood... it was envy.
~~~~
© AM Gray 2014