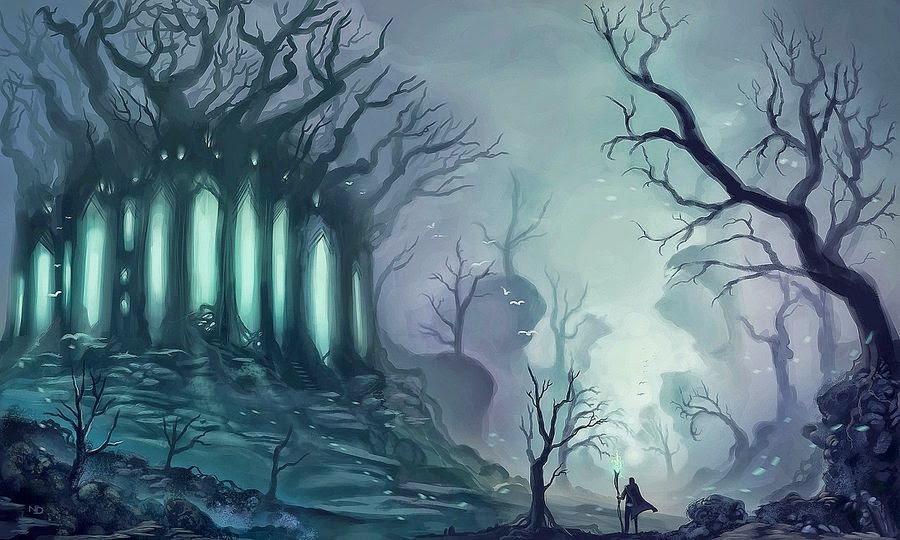 Pic Source: nele-diel.deviantart.com
http://writeworld.tumblr.com/post/89082593299/writers-block-a-picture-says-a-thousand-words
~~~~~~
He stood, leaning on his staff and studied the glowing clump of trees in front of him. His companion had taken the chance to take a piss. He had argued with the wizard about the existence of such a thing, so seeing it glow vaguely malevolently in front of him reminded him of the urgent need to empty his bladder. Trees didn’t normally glow, nor did they do so with that weird blue light, but then again, this wasn’t a normal forest, either.
The wizard tried to gather his thoughts. He was tired and it had taken them too long to find this place.
“You said it was a spinney,” his companion said.
“It is.”
“Too big. Spinneys just provide cover for game birds.”
“What else would you call it?” He yawned.
“I dunno.” Silence for a minute while he thought about it. “Glowing grove?”
“Huh. I like that.”
“Next question... How the heck do we get in?”
“We don’t; not without an invitation.” He was still leaning on his staff.
“So we’re waiting for the invite? Or are you just putting it off?”
“It’s not going to be easy.”
“Can’t find the doorbell?”
He chuckled. “No. They know we’re here.”
“And speaking of... what are they?”
“Yakshinis.”
“Never heard of them.”
“They are kind of like fairies which is why it was so difficult to find... but this is home of only the females of the species-”
“Oh, ho,” the man crowed and rubbed his hands.
“Exactly. And they are so beautiful.” A wistful sigh. “Full bodied and voluptuous.”
“Eh?” He didn’t understand the word.
He held his staff in the crook of his arm to make the explanatory movement with both hands.
A low whistle. “Nice.” He stared at the grove. “What’s the catch?”
The wizard nodded. There was often a catch; maybe always. “If they like you, they will give you what you want.”
“And if they don’t?”
“They suck your blood.”
“Ewww. It might be worth it, if they didn’t take too much of it.” He glanced at the wizard who made a face. “Dammit. Sucked dry, huh?”
“Yes.”
“Wait a sec,” the man said. “I get the idea that you’ve met them before.”
A nod.
“And you didn’t get sucked dry.”
Silence.
“Or did you?” he asked, with a knowing chuckle.
“We should get going,” the wizard said.
“Oh, ho. Seriously? So we might get some loving?”
“Be careful. Try to make it about them and you will get out with all your blood still in your veins.”
“O-kay. I reckon I can manage that.” He studied the wizard who was yawning again. “You seem kind of tired, though.”
“So a bed will be a welcome sight. Come.” He strode towards the trees, the man followed him, and as they approached, the wizard banged the base of his staff firmly on the ground just in front of the trees. It let out a sound like a low bell ringing.
The trees opened a gap wide enough to allow them to enter.
The man gasped at the beauty of the woman who appeared in the gap. “Wizard Conon,” she said. “I am very pleased to see you again.” She almost purred it at him.
He bowed his head. “The pleasure is mine, Rohini. You honour us with your presence.” He waved a hand at his gaping companion. “This is Edwin.”
“Edwin.” She spoke the name as if it now belonged to her.
Overwhelmed, he fell to his knees. “L-lady,” he stammered.
She stepped past him and slipped her arm through Conon’s. “Enter and be welcome. I missed you,” she breathed at him. Her breast rubbed against his arm and her other hand brushed his face. “You look exhausted.”
“Let me sleep for an hour and I will be rested enough for you.”
Edwin tried to stand to follow them and failed. He kept staring at her.
“You will sleep in my arms,” she promised with a kiss to his cheek.
“All four of them?” he checked.
She laughed and the sound made Edwin stumble again. “If you wish.”
“Edwin needs help,” he said.
She laughed again and made a gesture to some other Yakshini who hurried to help him inside. The trees shifted to close the gap.
~~~~