I saw a comic this week that so neatly encapsulated my works in progress (WIP) problem that I copied it here. And I checked the site and it is okay if you credit them. So thanks, poorly drawn lines… THAT is my problem. 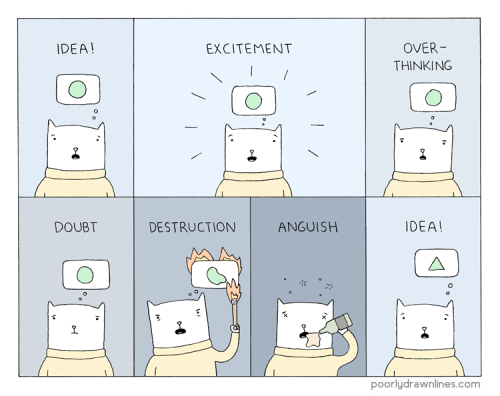 A reader asked about my WIP. Oddly, I had just drawn up a table of them all, so I thought I would share.
I am thinking of doing National Novel writing month (Nanowrimo) and you are supposed to work on a new project. I have maybe two (or three) that could be tagged as my nano project for 2014. If I have already written some words, I will just add more on the end. And a lot of the technical word count is plotting out the story and making back stories for characters rather than actual writing. Pre-planning is a bonus for nano. There is seriously no way you can write 50,000 words in a month without it.
With scrivener, I can set it to only count the words in the actual manuscript and not all the prep stuff that is in the same document, so it should be okay.
But here is a table of my WIP:

So, there are seventeen stories that I have plotted out, thought up names and back stories for the main characters, found cool photos that look like my head canons, done some research on places and items that feature in the story, written a few words and maybe made up a Scrivener project for them. SEVENTEEN! It’s about 400,000 words in total, I think.
And it’s not just that I have that many stories, but I have more than ten genres, as well!
And that’s not even counting the other half baked ideas that I have never made a start on, or the short stories that people tell me should be extended, NOR is it counting the manic number of fanfiction stories I still have to finish.
So my over thinking thoughts (as per the cartoon) go something like this… oh, my god I've written a hundred thousand words of bog standard portal fantasy with a magic girl who is probably a Mary-Sue. Who would want to read this? Start next story. OMG I have written a story that uses an ancient god. I have appropriated that from another people, I am a horrible person, and who would want to read that? Start next story… etcetera.
I get that this is me censoring myself. Instead of going back and fixing the issue, I get intrigued by a new shiny idea. I will probably self-publish these, so I'm not trying to sell them to a publisher or literary agent. I won’t spend fourteen years getting it perfect like the Aussie guy who won the 2014 Man Booker prize this week. (Richard Flanagan won with The Narrow Road to the Deep North.)
I'm not that kind of writer. After making a cover, the worst that could happen is that I upload them and they don’t sell. Although my fertile imagination could think up a few more scary options. *laughs at self*
At least I didn't follow the cartoon and delete them! It’s all there to be edited. You can’t edit a blank page.
It can be fixed. It can be finished. I just need to pick one and do it.

Email ThisBlogThis!Share to TwitterShare to FacebookShare to Pinterest
Labels: works in progress, writing