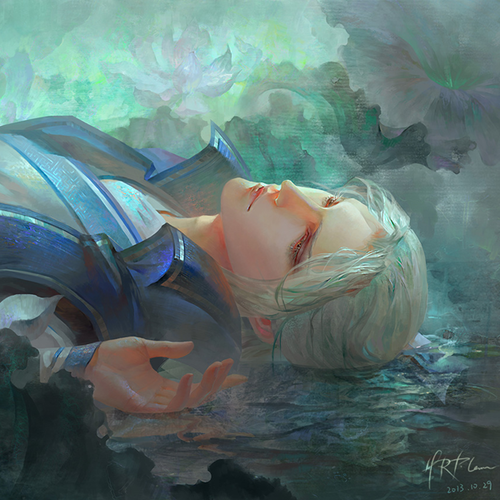 Picture Source: hrfleur.deviantart.com
http://writeworld.tumblr.com/post/87391588361/writers-block-a-picture-says-a-thousand-words
The battle raged for what seemed like days. The light and noise frightened the local villagers so badly that they abandoned their homes and went up into the mountain to hide in the caves.
When they came back, the village was damaged; the soldiers had raided it for supplies and valuables but luckily most of the buildings were still standing. Not like their crops and fruit trees; they were all destroyed.
The villagers felt justified in searching through the abandoned camps for anything the armies had left behind. They buried any bodies to stop disease and ploughed back the churned earth into straight furrows. They didn’t know which side had won and they didn’t care. It didn’t make much difference to the day-to-day life of the villagers.
The girl was sent out to find any stray livestock. The noise had frightened them too and most had startled and broken the fences the first night. The others probably got eaten.
She had walked quite some way when found the dead soldier in the ravine; his blue uniform damaged and dirty. He lay flat on his back with his hand above his head. He looked as if he was sleeping, but oddly, the earth under his head was blue. As if the colour had leached out of his uniform and stained it somehow.
She had never seen anyone with such fine pale skin and delicate features. His hair was even light coloured, almost silver. The colour looked like some of the old people in the village but his skin was not wrinkled or aged. She leaned down to look closer and noticed that the hair in his eyelashes and brows was dark. Had something happened to him to lighten his hair? Or, like she knew some women did, did he dye it?
He looked so different that she wanted to touch him. His features were as fine as glass. She touched his cheek and was not surprised that he felt cold. Then she brushed a fingertip over his eyebrow and jumped back a foot when the eye opened. He wasn’t dead.
He tried to speak, but only croaked something she didn’t comprehend but she did understand. Water.
Carefully she poured drops from her drinking flask into his mouth. His colour improved immediately. And it seemed to get more blue, especially his hair. Once he had the water inside him, he rolled over and as the skin of his face touched the blue puddle, it sucked up the blue hue from the ground.
She blinked. “What w-was that?”
He understood that. It took him some time to find the words, as if hers was a language he seldom used. “My... blessing? No... gift... manna?” he tried.
She was confused. “It’s magic?”
He nodded.
“And it kept you alive?”
Another nod. “The fight, no battle. Who won?”
She shrugged. “I don’t know. They’re all gone.”
With a groan, he threw his body back on the ground.
“Don’t do that! You’ll hurt yourself.”
He rolled onto his side and curled up. “Let me die.”
“You can’t stay here,” she said. “Someone will find you.”
“I... don’t care.”
“Well, I do.”
He glanced at her. “Spoils of war?” he said in his own language and then he laughed.
She frowned at him, suspecting he had made a joke at her expense.
“Fine.” He took a deep breath, but it hurt him to do it. “I am yours.” His hand reached out to her. “Help me move.”
Racking her brain, she was trying to think where she could hide him, and bring food and water without raising suspicion. The shepherd’s hut might work.
It wasn’t until later that night, when she was in her own bed and sleep evaded her that she started to worry if she had even done the right thing.
~~~~
© AM Gray 2014