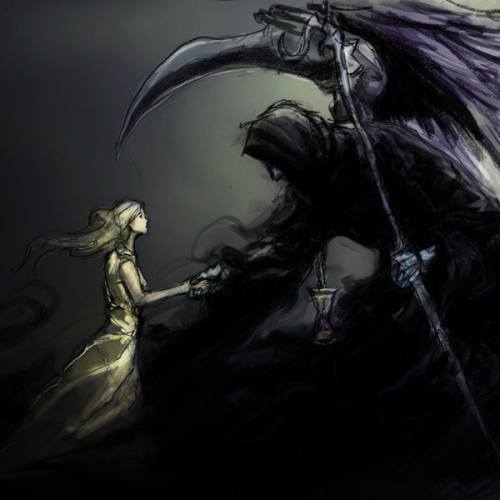 Source: theboyofcheese.deviantart.com
http://writeworld.tumblr.com/post/94527198269/writers-block-a-picture-says-a-thousand-words
“H-hello,” she said nervously. She had been so tired; so very tired. Days of a fever that was too high. Her body could not fight the illness any more and her fevered dreams kept her from restoring her strength. Her strength was less to begin with; she gave too much of her own meals to her younger brothers and sisters.
She had felt better when her spirit had passed out of her exhausted body. The last thing she had expected to meet was death himself but, remembering her manners, she greeted the dark spirit. She assumed that Death was male.
“You are Death?” she checked. He wore the black hooded cloak, the scythe to harvest souls and had an hourglass hung around his neck.
“Yes.” The voice was sibilant.
“I feel better now.”
“Yes.”
“Is it possible to go back?”
“Why would you want to? Your life was not easy.”
She wondered how Death knew that. She wondered also what her life would be now; such as it was. “When I have rested, I would like to go back and look after my siblings.”
“So young,” Death hissed.
She wasn’t sure whether Death meant her or her siblings. “They need me. The youngest is not yet one. They have no-one else.” The thought occurred to her that if there was no-one to look after them, they would soon be joining her on this side of the black curtain.
Death’s head shook. “I cannot.” A pause. “I harvest the marked souls. I do not mark them.”
“Oh.” Not that she was sure what she could offer Death. She had nothing to bargain with. “I understand.” She held her hand out to shake. “Thank you, for explaining.”
The hood jerked back a little as if Death was surprised that she would want to touch him. Tentatively a hand slipped from under the robe sleeve to shake hers.  She gripped the skeletal offering firmly. “I am ready to go, now,” she said with dignity.
“No-one touches me,” Death said.
“Oh, I’m sorry.” She nearly patted him with her other hand to apologise before hastily drawing it back. The hood followed the movement.
“Close your eyes,” Death whispered to her.
When she opened them she found herself back in her sickbed with the eager faces of her siblings gathered around her.
Marked for death but not collected, she knew she was living on borrowed time. Nothing could stop her now; her entire life was devoted to watching the children in her care grow to adulthood.
The day after her last sibling reached legal age, she lay in her bed. “I’m ready to go now,” she announced to the empty room; purposefully echoing the words she had said to him years ago.
She closed her eyes and knew that he would take her this time, if only to feel her hold his hand again. Fifteen years was all the time she needed and it was nothing to Death.
But Death was not quite prepared to be hugged.
~~~~
© AM Gray 2014